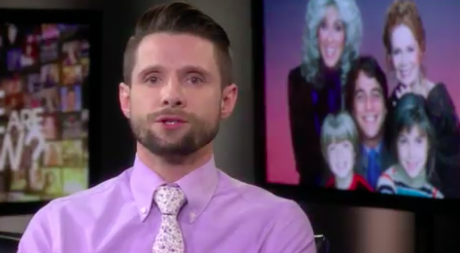 On Saturday night, “As the World Turns” alumni Danny Pintauro sat down with Oprah in a candid interview for the series, “Where are they now?” In the segment, Danny revealed that he had been HIV positive for over ten years. He has been terrified for his fans to find out because of the stigma attached to the disease.

Danny portrayed Paul Ryan Stenbeck on “As the World Turns.” Who can forget his portrayal of Jonathan Bower in “Who’s the Boss” as Judith Light’s adorable son? He had a promising career that was led astray by not only a terrible drug addiction but a horrific disease. He began the interview by proclaiming, “I wanted to tell you this long time ago, but I wasn’t sure I was ready. I am ready now. I am HIV positive. I have been for the past 12 years.”

He went to explain he hadn’t shared about his HIV status because he wasn’t sure people were ready. He revealed he was not sick, and he has taken every precaution to make sure he remains healthy for years to come. “It’s just a big deal, you know? It’s not something that people are really talking about,” he told Oprah with tears in his eyes.

This isn’t the first-time Pintauro revealed a part of his private life to the media. In 1997, he came out to the public revealing he was gay. He credited TV mom, Judith Light as the person who urged him to tell the media. He said she told him it was a way that he could control the conversation with the media. He said, “It was the best thing. They can’t misquote you.” He said he gave direct quotes that couldn’t be misconstrued. In the end, “The National Enquirer” wrote a great article about his sexuality.

Danny recalled when he learned of his HIV status, and the fears he experienced as he came to terms with it all. He was undergoing HIV testing every six months as a precaution. He had just come out of a two-year relationship, and he was looking forward to exploring other sexual experiences. He admitted he was doing crystal meth as a way to loosen him up more to be able to explore his sexual side. “Crystal meth takes away your inhibitions. If you want to be adventurous it will take you there without fear, “He said. Danny revealed that he doesn’t even remember the man’s name that changed his life forever in March of 2003.

When he was diagnosed, he had a sense of relief. For years, he was terrified of this terrible disease. Now, he had it and he could find a way to move on. He said, “I no longer had to live in fear of the disease.” Pintauro now lives with his devoted husband Will Tabares in Nevada. He works as a restaurant manager and has dreams of opening a bed and breakfast inn with his husband. He hopes that his bravery will help others that are living in fear about telling friends or family about their sexual orientation or HIV status.