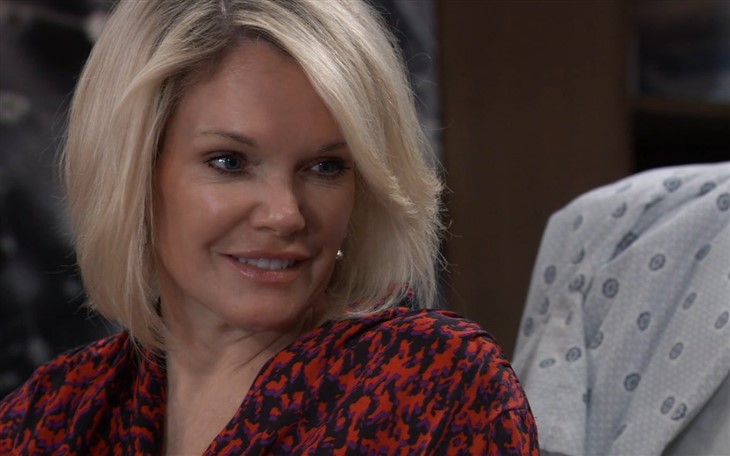 General Hospital (GH) spoilers and updates tease déjà vu and family feuds when Ava Jerome (Maura West) walks in on Austin Gatlin-Holt (Roger Howarth) and Mason Gatlin’s (Nathanyael Grey) family fight. Ava remembers Mason from the night of her attack by the Hook, and he looks rather uncomfortable!

Austin and Mason are in Austin’s office at the hospital when they start arguing, Mason being upset because Austin didn’t operate on a patient “the family” sent him. Austin’s not taking orders any more doing these illegal operations on what appear to be drug mules. Worse yet, Mason brags about something completely out of line and Austin asks him what he did.

Mason brags that he approached Georgie Spinelli (Lily Fisher) in the park while she was with James West (Owen and Curtis Rufca), Maxie Jones’ (Kirsten Storms) children. He offered little Georgie a lollypop which she refused, either not liking lollypops or having been warned against strangers, but next time he won’t be a stranger!

Austin and Mason continue arguing about his approaching Georgie, with Mason making a snide remark about little kids being so trusting, Austin telling him he wouldn’t dare! Mason dares him, saying, so make him, and Austin grabs him by the collar as Ava comes through the door, announcing herself with “Knock Knock”. She asks if she’s interrupting something, Mason tells her no, not at all, Austin asks her if he can help with something. Ava reminds him he asked her to stop by, and then he remembers the referral he was going to get her to a plastic surgeon for her hook wound. He excuses himself and goes into a side room to retrieve the information, telling Ava to give him a second to get the referral, and soon returns.

As Austin returns, sitting at his desk watching, Ava and Mason begin to have a conversation. Ava says hi to Mason and he says hi, how ya doin’, and turns away from her-Ava probes, asking him if she knows him because he seems so familiar to her. Mason says he’s Austin’s cousin and visits every now and then, but Ava soon realizes that’s not it.

Ava says odd, she’s having the strongest sense of déjà vu right now – Austin focusing in on her with concern. Then it comes to her – she recognizes Mason from the night she was attacked by The Hook, and remembers he was there; she had heard the two talk and followed her!