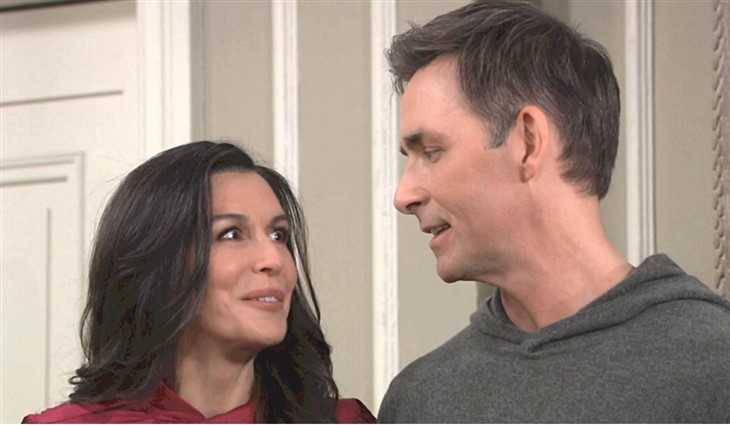 General Hospital spoilers indicate that Valentin Cassadine (James Patrick Stuart) and Anna Devane (Finola Hughes) have fallen into Victor Cassadine’s (Charles Shaughnessy) trap. Now that Victor has them where he wants them, Valentin and Anna may be presumed dead.

General Hospital spoilers reveal that Valentin thought he was working with a friend. However, it appears that Victor’s money is much more important than friendship. How could a woman who has worked with Valentin for years double-cross him? Did their friendship mean so little that she would help Victor take Valentin from his young daughter?

Victor has been horrible to Valentin for years. In the past year alone, Victor has taken Valentin’s daughter, tried to kill his lover, and even threatened to kill Valentin himself. Valentin’s friend may not know any of this, but anyone working for Victor has to understand what he is like. How could anyone allow him to manipulate them this way?

GH Spoilers – Anna Devane And Valentin Cassadine Are On A Mission

Anna and Valentin are on a mission to find Lucy Coe (Lynn Herring) and prove that she is alive. Establishing that Victor is holding Lucy hostage could go a long way to putting Victor away. Victor has already faked Lucy’s death, and now he plans to fake Valentin and Anna’s as well. Will the three of them end up locked up on Cassadine island like Drew years ago?

If Anna and Valentin are presumed dead, who will bother to come looking for them? Could Felicia realize what is happening and rescue Anna, Valentin, and Lucy? Once the three are together, could Lucy help to figure out a way to escape? Will Valentin and Anna escape Victor’s evil clutches before he gets a chance to kill them?

Victor seems to be racking up the ways for his family to hate him, and he’s doing an excellent job of making them hate him. Could all of this be working up to a whodunit mystery? Will someone finally get rid of Victor once and for all? Could this finally be the end of Victor and his manipulations? Are the Cassadines fed up with Victor’s attempt to rule their lives?

Victor is still working on some outlandish plot that deals with the Ice Princess necklace from the last check. Will Holly use that necklace to bargain with and put Victor’s plan back on track? What evil plan is Victor waiting to launch on the unsuspecting people of Port Charles? Will Anna and Valentin escape warning everyone before it happens?

The Bold And The Beautiful Spoilers: Carter Is Bound To Lose Katie, Another Love Lost