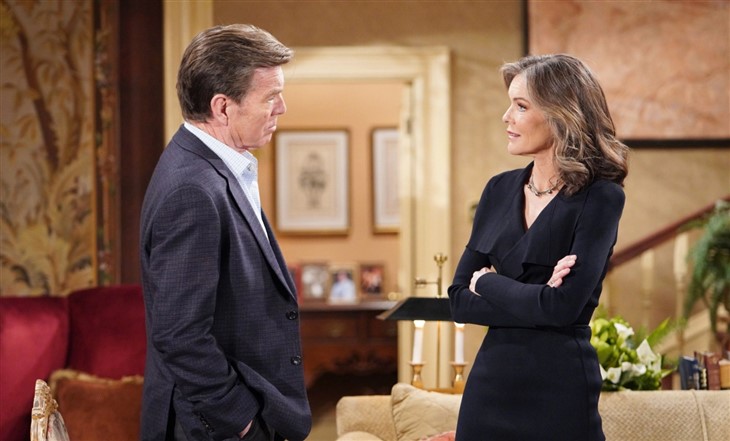 The Young and the Restless spoilers for January 23-27, 2023, reveal Kyle learning what is really going on with his parents.

Diane Jenkins (Susan Walters) finally manages to get Jack Abbott (Peter Bergman) back into her bed after all these years. She seems a little hesitant at first and wants to pump the brakes, but Jack convinces her they really want it and they bask in the afterglow both in bed and out of bed.

The Young and the Restless spoilers show Summer Newman Abbott (Alison Lanier) and Kyle Abbott (Michael Mealor) can immediately see what is going on and Summer just knew this was going to happen. Phyllis Summers (Michelle Stafford) had warned her daughter that Jack would fall for Diane’s charms once again and she is not happy about this at all. Surprisingly, neither is Kyle. While he loves both of his parents, he knows that they can be volatile together.

Y&R Spoilers – Lauren Fenmore, This Is Your Life

As Tracey E. Bregman celebrates 40 years as Y&R’s Lauren Fenmore, the soap treats her and her fans to some great flashbacks and memories as Lauren receives a fashion industry award.

Billy Abbott (Jason Thompson) has something to tell Chelsea Lawson (Melissa Claire Egan) that will blow her mind away. Does Billy confess his love for her just after a bad breakup with Lily Winters (Christel Khalil)? As for Lily, she is still at odds with Devon Hamilton (Bryton James) as they try to come to some sort of agreement to make their business and personal lives amicable.

Finally, expect to see Phyllis make a big promise to her son, Daniel Romalotti (Michael Graziedei), as well as Victor Newman (Eric Braeden) continuing to play games with people’s lives — namely his family members. Adam Newman (Mark Grossman) and Nick Newman (Joshua Morrow) won’t be too happy about this. Stay tuned to The Young and the Restless weekdays to see how these stories play out.