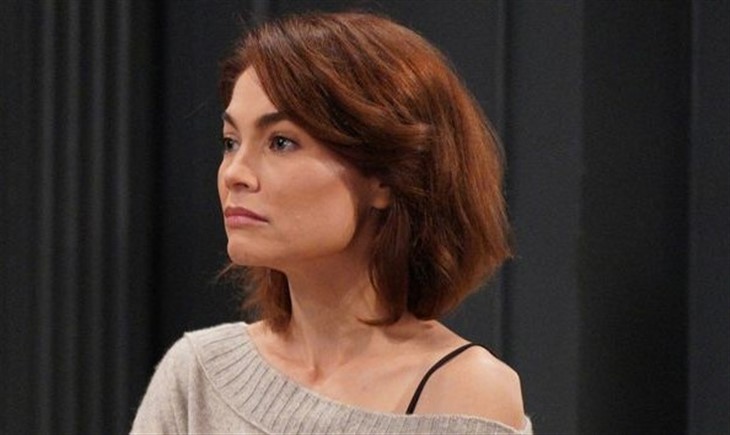 Elizabeth Webber Baldwin (Rebecca Herbst) can hardly believe it when Carolyn Webber (Denise Crosby) is standing in front of her in Kelly’s wanting to talk and make amends. She thought she was done with her parents but they keep showing up in PC now after all of these years.

General Hospital spoilers say Carolyn is also there because Nikolas Cassadine (Marcus Coloma) summoned her to see if she can work some amnesia magic on Esme Prince (Avery Kristen Pohl). She managed to get Elizebeth to forget what happened with Hamilton Finn’s wife. Perhaps she can get Esme to have permanent amnesia.

While his mom has to deal with the grandmother that he never met, Cameron Webber (William Lipton) has to deal with learning his ex-girlfriend lied to him about why they really broke up. Josslyn Jacks (Eden McCoy) said it was because they had grown apart, but now he finds her in her dorm room with Dex Heller (Evan Hofer) and knows they just had sex.

Josslyn begs Cam not to tell anyone that she is with Dex because she fears that Sonny Corinthos (Maurice Benard) will hurt him. Will Cam listen to her pleas or decide he doesn’t care about what the mini lying liar who lies wants? Yes, Josslyn is just like her mother, Carly Spencer (Laura Wright).

Willow Tait (Katelyn MacMullen) is forced to make a big decision and we are sure it has to do with her bone marrow, her baby, and her need to be on death’s door. Esme’s baby is also in question as both Nikolas and Spencer Cassadine (Nicholas Alexander Chavez) want custody of the child, something Sonny and Laura Collins object to.

Austin Holt (Roger Howarth) and Ava Jerome (Maura West) find common ground as they grow closer to one another. Is this just a friendship or something more? Finally, Olivia Quartermaine (Lisa LoCicero) has a talk with Drew Cain (Cameron Mathison) and this must have to do with him forgiving Carly for her sins, as almost everyone else has at this point. Stay tuned to General Hospital weekdays to see how these stories play out.