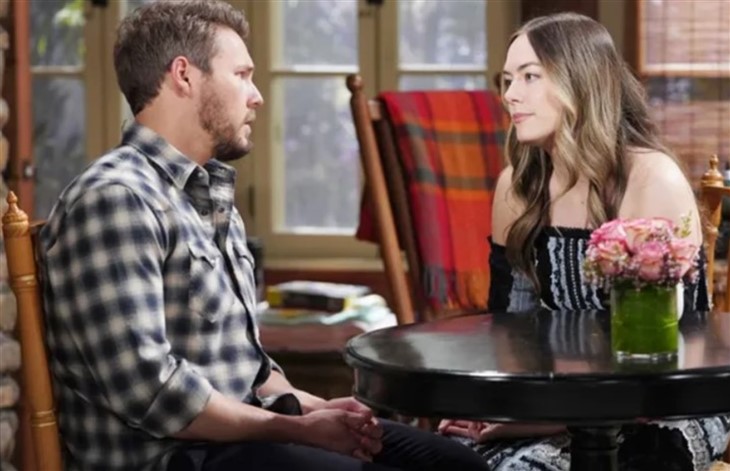 Liam and Wyatt Spencer (Darin Brooks) were stunned when confirming that their father is involved in a relationship with Sheila Carter (Kimberlin Brown). Bill Spencer (Don Diamont) plans to protect Sheila and is using a blackmail threat against numerous characters to defend the reality of his newest love from being sent to prison, where she certainly belongs.

Hope is raising the son she adopted without the co-parenting peace she achieved with Thomas in the recent past. His loss at Forrester Creations’ Hope For the Future is felt.

Liam and Wyatt have not had as much influence as their younger brother, Will Spencer (Finnegan George), has with Bill. Will’s age enables his admiration for their father, whereas Liam and Wyatt have seen sides of Bill that he never has.

But Clifton and Brooks’ characters have never seen their dad behave this way. They described his choice to protect and couple with Sheila as crazy because it is.

Bill is convinced that he can only move forward because of the presence of Sheila in his life. He sees her as similar to himself, with that personality type factor preventing additional drama in either of their lives or so his soapy theory goes.

No one gave Thomas more chances to prove himself and more opportunities to recover from his mistakes than Hope, except Ridge Forrester (Thorsten Kaye). Hope truly felt that Thomas changed. She let down her guard and now regrets doing so.

The harsh comments Hope made to Thomas were unlike others she made in the past. Rather than speaking due to anger, Hope stood on higher moral ground, looking down at someone she felt was inferior. That hurt his ego.

There is no way to determine if Thomas will pursue a redemptive path or seek reprisal against Hope and others. Viewers will need to see his current perspective when Atkinson’s character returns.

The Bold And The Beautiful Spoilers – Work-Life Balance Back In Order?

The intense pressure Thomas applied in recent years made it hard for Hope to think clearly at work. Her embrace of Douglas Forrester (Henry Joseph Samiri) appeared to confirm mutual trust with Thomas.

However, a different dynamic will exist when Thomas reappears from his self-imposed exile. Unless the FC Board rules otherwise, he will have no reason to see Hope at work. Hope likely believes that was a needed step that should help reestablish balance on B&B.

GH Spoilers: What’s Up With Cam? Is He About to Form An Alliance His Friends Don’t Approve Of?