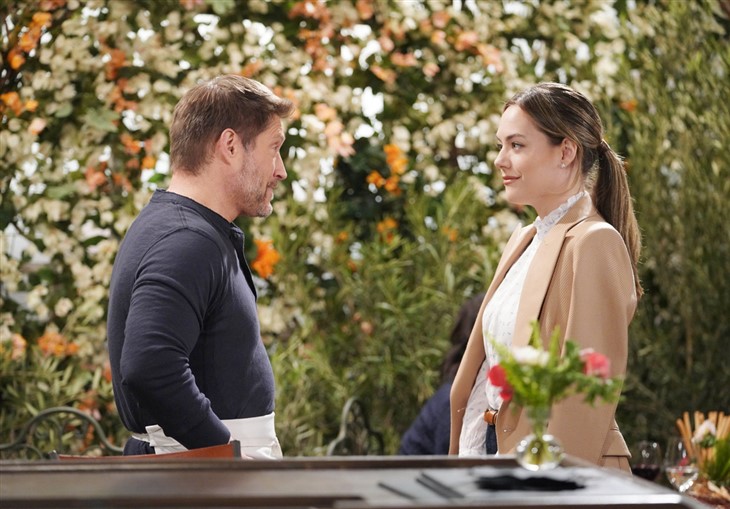 The Bold and The Beautiful (B&B) spoilers and  updates tease that Deacon Sharpe (Sean Kanan) and Hope Logan (Annika Noelle) will bond deeper when she’s proud of her dad. It turns out Deacon’s recent trip abroad to secure funding to buy Il Giardino, the restaurant he’s been working at as a janitor was for real, and he’s the new owner.

Il Giardino has seemed like an upscale Italian restaurant, but with the owner retiring Deacon would have been out of a job. Deacon managed to finance a trip to Italy and secured a down payment so he could buy the restaurant, and now wants to expand the menu with a new pizza recipe. Deacon’s on the right track, nearly everyone likes pizza and this could expand the customer base substantially and as he shares his plans with Hope, she’s very proud of him.

This has been Deacon’s fondest dream, to do something that will make his daughter proud of him and this looks like the ticket. No one was willing to give him a second chance and he has had so many doors slammed in his face, his daughter’s approval means everything to him.

B & B Spoilers – Will Deacon Sharpe Prove He’s A New Man?

Deacon knows there will be some who might even stop coming to the restaurant when they find out an ex con is the new owner, but that’s expected, there’s a stigma. Deacon takes the attitude, as does Hope, thankfully, that if some customers leave it’s their loss and Deacon’s gain – there will be new ones to take their place. A lot of people prefer pizza over fine wine, some for economic reasons, others for personal preference, and if he loses one hoity-toity he’ll gain two pizza lovers. After all, it’s not like he’s turning Il Giardino into the neighborhood pizza joint, it’s just a lower cost addition to the menu but with the same high quality ingredients. Hope agrees, Il Giardino could stand to have more of a family feel where existing longtime customers can bring their grandchildren and they’d actually like something!

The Bold And The Beautiful Spoilers – Family Night

Hope promises when Deacon gets his pizza recipe perfected, she and Liam Spencer (Scott Clifton) will come and bring the kids for a family night. Deacon is pleased – and encouraged, and he tells his daughter it’s a date for sure, if Liam doesn’t have an attitude! But Liam’s having major trouble with his own dad, and Deacon knows all about Bill Spencer’s (Don Diamont) involvement with Sheila Carter (Kimberlin Brown).

Deacon’s secretly hurt, but manages to disguise his emotions, not wanting Hope to pick up on them. He’s just glad she didn’t figure out “Lina” was Sheila in disguise.

Savannah Chrisley Believes She Fights With Jesus On Her Side