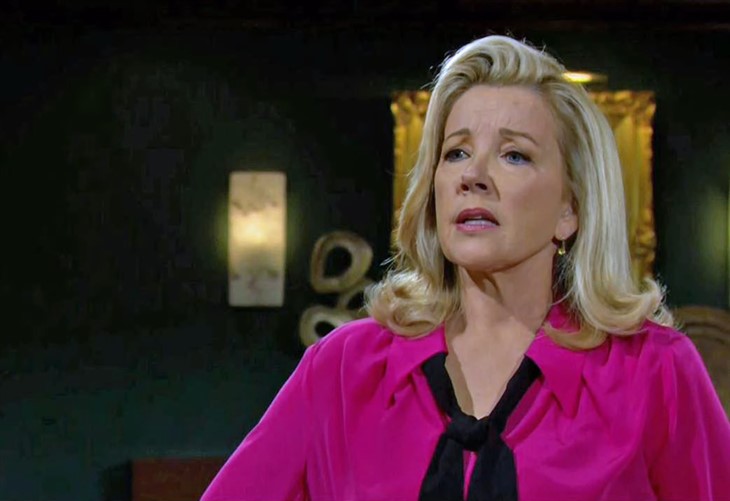 The Young and the Restless spoilers for August 15-19, 2022, reveal Nikki Newman taking charge and Chelsea Lawson going for broke.

The Young and the Restless Spoilers: Nikki Brings In The Big Guns

When Phyllis Summers (Michelle Stafford) points out that Nikki Newman (Melody Thomas Scott) has not been doing enough to get information on Diane Jenkins (Susan Walters) and bring the woman down, Nikki feels challenged. After all, she entered into this arrangement with Phyllis and Ashley Abbott (Eileen Davidson) and she is not going to let them show her up.

To that end, she brings in a gossip journalist from Newman Media who can find the dirt on anyone and she may have a lot of things to tell them about what Diane was up to during that decade when she was supposed to be dead. Maybe now Jack Abbott (Peter Bergman) will wake and stop falling for her charms.

The Young and the Restless spoilers say Victor Newman (Eric Braeden) once again gives his family a warning about sticking together in the Ashland Locke matter, but Nick Newman (Joshua Morrow) is still a hot mess and ends up spending a close moment with Sally Spectra (Courtney Hope).

After bringing up Johnny Abbott to Billy Abbott (Jason Thompson), wanting the boy to know that she is his biological mother, Chelsea Lawson (Melissa Claire Egan) decides she is now going to go to Victoria Newman (Amelia Heinle) with the idea. After all, Johnny and Connor Newman (Judah Mackey) are brothers and they don’t even know it. She feels Connor deserves a sibling and she might not be able to give him one any other way.

As expected, Victoria doesn’t want to even entertain such an idea and lets Chelsea know this in no uncertain terms. Surprisingly, Chelsea decides to drop the subject for the moment but informs Victoria she has no intention of giving up.

As her boyfriend deals with Chelsea, Lily Winters (Christel Khalil) has to deal with her brother and her cousin. Devon Hamilton (Bryton James) and Nate Hastings (Sean Dominic) are still at each other’s throats, which doesn’t bode well for Chancellor-Winters at all.

Finally, Abby Newman (Melissa Ordway) catches Chance Chancellor (Connor Floyd) in a compromising position and Diane makes more inroads with Jack. Stay tuned to The Young and the Restless weekdays to see how these stories play out.