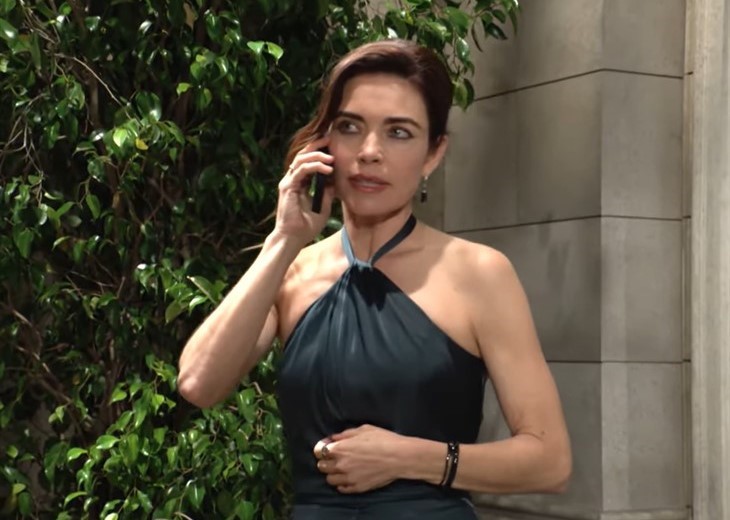 The Young and the Restless spoilers reveal that Victoria Newman (Amelia Heinle) manipulated Ashland Locke (Robert Newman) when she ran away with him. Victoria texted a mysterious partner-in-crime, who was assumed to be Victor Newman (Eric Braeden). However, Victor doesn’t seem to know about the scheme. So, who was helping Victoria with the con job?

The Young And The Restless Spoilers – Victoria Newman’s Text Message

Y&R spoilers reveal that when Victoria went to Manhattan with Ashland, everyone thought she had lost her mind. However, it quickly became clear to viewers that Victoria had a plan in mind. After all, Victoria seemed way too happy when Ashland was around. The minute that Ashland’s back was turned, though, Victoria’s smile would disappear.

Fans knew for sure that Victoria was conning Ashland when she suggested self-financing Destiny Media. Victoria mentioned a corporate bank account and that she already deposited $250 million. Then, Victoria told Ashland that he needed to make his half of the deposit.

There was also that telling text message, in which Victoria told a mysterious recipient that everything was going according to plan.

Once Ashland made the deposit, Victoria immediately packed her bags and made arrangements to fly back to Genoa City. However, Ashland forgot the proof of self-funding and went back to the hotel to retrieve it. That’s when Ashland demanded to know what was going on.

Victoria was forced to admit that she had no intention of being with him. Victoria also let Ashland know that the money he deposited was already gone.

The Young And The Restless Spoilers – Secrecy And Independence

The Young and the Restless spoilers reveal that Victoria is back in Genoa City but didn’t immediately reunite with her family. Instead, Victoria checked into a hotel and called Nick Newman (Joshua Morrow). Victoria gave her brother a huge hug and let him know how much she appreciated him trusting her decisions.

The rest of the family is worried about Victoria’s secrecy. They all want to know what’s going on and what happened with Ashland in New York. However, Victoria told Nick to arrange a family meeting, where things were going to change moving forward. So, it sounds like Victoria is going to demand that her family trust the decisions that she makes instead of trying to control every aspect of her life.

The question that remains is who was helping Victoria if it wasn’t Nick, Victor, or another member of the Newman family? Well, Victoria told Ashland that she had a lawyer draw up paperwork for the corporate bank account. Ashland read it over while Victoria talked about getting a building for their new company.

Ashland doesn’t seem like the type that is easily distracted, which suggests everything in the paperwork seemed legit. The one person that could make this happen and prevent Victoria from legal consequences for her scam is Michael Baldwin (Christian LeBlanc).

Would Michael really do something like this without telling Victor the details? Michael might have given Victor a hint without telling him any details. That would explain Victor telling Nick and Nikki Newman (Melody Thomas Scott) that he trusted Victoria while she was gone.

However, it was also teased in Soap Opera Digest that Michael was eager to punish Ashland for the Peruvian kidnapping. It was stated that Michael would get a bit dirty and devious to make that happen.