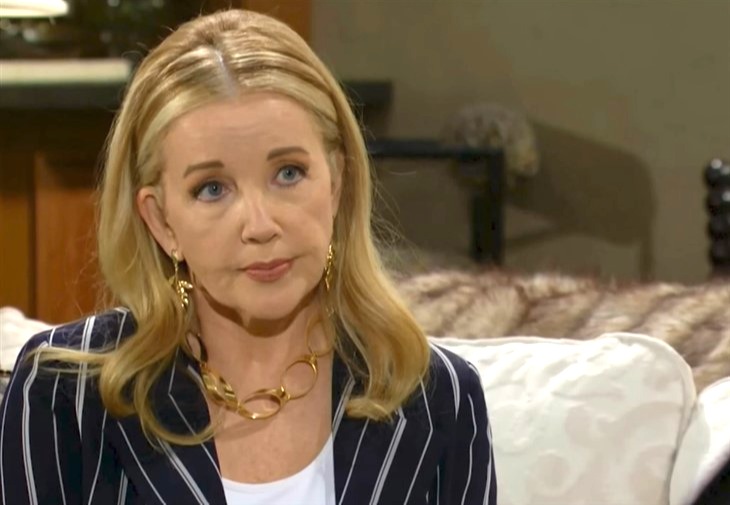 The Young and The Restless spoilers and updates tease that Nikki Newman’s (Melody Thomas Scott) will deliver some dirt on Diane Jenkins (Susan Walters). Her source will confirm that Diane was indeed in a dating relationship with Tucker McCall (Trevor St. John) in LA, throwing suspicion on why they’re both back.

The Young And The Restless Spoilers – Two Liars?

Tucker claims he wants to make amends with Ashley Abbott (Eileen Davidson) but if he was dating Diane in Los Angeles as recently as six months ago, why? He completely proved himself a liar when he acted like he didn’t know she was back from the dead when he ran into her at the vow renewal. As for Diane, she never mentioned his name and acted shocked to see him when he approached her, like she hadn’t seen him since before she faked her death.

The Young and the Restless spoilers show Nikki knows the two must be plotting something together, but she’s not sure what. But she knows that he even fooled his own son Devon Hamilton (Bryton James) when he contacted him a couple of years ago – Tucker wasn’t off the grid.

Nikki doesn’t have much to go on but she does have proof of Diane’s lies; she knew and was involved with Tucker in Los Angeles and never disclosed it. Nikki knows when she first came to Genoa City she was supposed to disclose everything to the Abbotts and she obviously did not; one lie means more lies. The Newmans have more to worry about with Tucker’s return than just that he might be involved with Diane, he might cause problems with Victoria Newman’s (Amelia Heinle) plans. Victoria wants to buy out Chancellor-Winters when they go public, and Tucker might be able to stop that from happening by putting more money into their stock.

The Young And The Restless Spoilers – Let’s Find More Dirt

Victor Newman (Eric Braeden) already has plans to dig up dirt on Tucker and Phyllis Summers (Michelle Stafford) plans to hack into the company in the UK they think is Tucker’s. If Tucker and Diane were together in Los Angeles then if they find more dirt on him, they might find more on her in the process. Diane claims to have been in real estate in LA under the name Taylor Jensen, maybe she and Tucker perpetrated real estate scams together.

Now there’s two scoundrels to run out of Genoa City and it looks like they’re in cahoots. The warning flag has been raised.