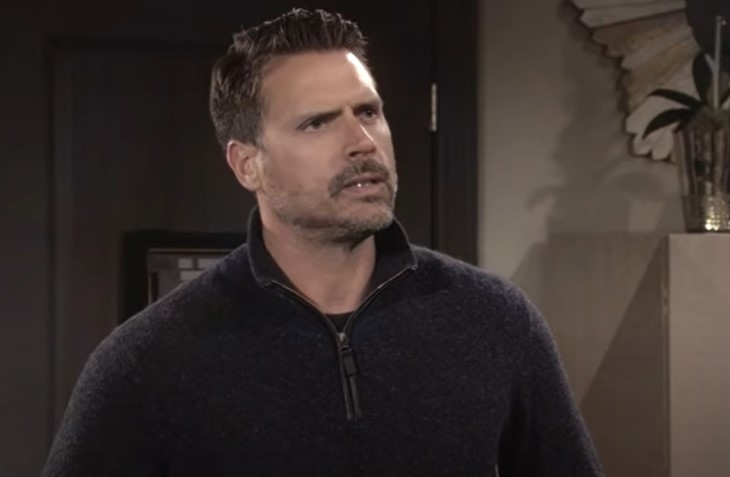 The Young and The Restless (Y&R) spoilers and updates tease that it will be Nick Newman (Joshua Morrow) who is faced with the unenviable task of notifying his ex-wife Sharon Rosales (Sharon Case) that her husband, Rey Rosales (Jordi Vilasuso) was involved in a fatal car crash! Nick will try to comfort the inconsolable widow in an upcoming episode of The Young and The Restless!

Viewers of The Young and The Restless know it would make sense for Nick to be one of the first to know about the fatal car crash, because it appears that his sister Victoria Newman-Locke (Amelia Heinle) will be in the other car. It’s possible that more than two cars could be involved, and it looks like Victor Newman (Eric Braeden) will also rush to the scene of the crash, because it happened when Victoria was on the phone with her mother, Nikki Newman (Melody Thomas Scott).

Victor will take control of the situation to help Victoria, while Sharon will have experienced a strange feeling of déjà vu after giving Chelsea Lawson (Melissa Claire Egan) her okay to have Rey go with her and Connor Newman (Judah Mackey) to a hockey game in Chicago. Viewers of The Young and The Restless can expect that Nick, too may go with Victor to the scene of the accident because it sounds like they won’t even get out of Genoa City before the crash occurs, which appears to be at night.

Viewers of The Young and The Restless know that if Nick and Victor were at the scene of Victoria’s crash, they will know who was in the other car, and possibly more than one other car if that’s the way it plays out. Victor and Nick would also want to help Chelsea and Connor, and it’s possible Adam Newman (Mark Grossman) may go to the scene too, since Victor is all about family unity including Adam.

Adam will comfort Chelsea later in the week, so that could be about the loss of her close friend Rey or it’s possible Connor could be hurt in the accident. Viewers of The Young and The Restless will see Nick go to Sharon in person to deliver the horrible news, and it’s a good bet that she’ll be inconsolable, especially since she’s rather taken Rey for granted as of late. Sharon has been preoccupied with Mariah Copeland (Camryn Grimes) and Tessa Porter’s (Cait Fairbanks) upcoming wedding and Noah Newman’s (Rory Gibson) lack of a love life!

Longtime viewers of The Young and The Restless will remember that Nick and Sharon have a long history, having married when they were barely out of high school. They unfortunately have been through some sad times together, especially when they lost her daughter, Mariah’s twin, Cassie Newman (Camryn Grimes) due to a car accident as a young teenager.

Sharon will also face the horrible task of notifying Rey’s family in Miami, which will not be easy for her; viewers of The Young and The Restless can expect that Nick will stay close by her side for support. Rey’s death will undoubtedly affect what should have been a joyful time for Sharon’s family, and viewers will wonder if Tessa and Mariah will put off their wedding!

GH Spoilers: Michael And Willow Go To War With Nina!