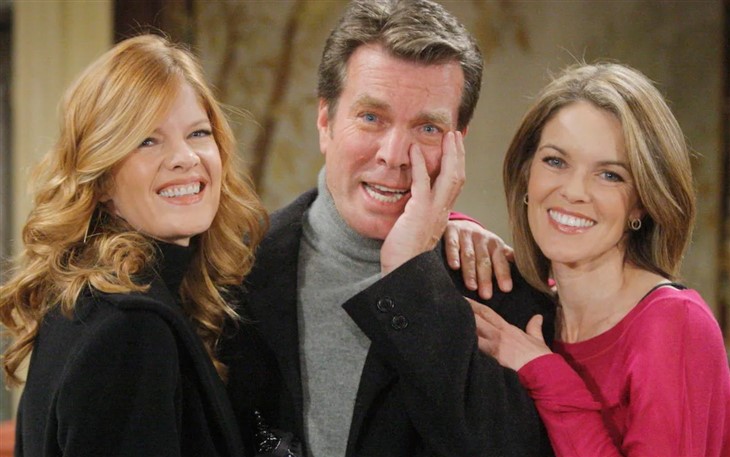 The Young and the Restless (Y&R) spoilers reveal that Diane Jenkins (Susan Walters) is alive and ready to rumble. Until Diane’s return, Jack Abbott (Peter Bergman) was getting closer to Phyllis Summers (Michelle Stafford). It seems Jack is being set up for a love triangle storyline. So, which woman will Jack choose and just how nasty will the war get?

The Young And the Restless Spoilers – Getting Closer To Phyllis Summers

Y&R spoilers reveal that Jack told Phyllis during a drunken confession that he still loved her. Afterward, Phyllis and Nick Newman (Joshua Morrow) really started to have some problems. Eventually, Phyllis and Nick broke up although Jack’s confession wasn’t the main reason. Jack wanted to get back together with Phyllis. However, she was scared that it would ruin their special friendship. Phyllis has a history of hurting Jack and didn’t want to risk it happening again.

When Jack learned about Keemo Abbott’s (formerly played by Philip Moon) death, Phyllis accompanied him to Los Angeles. Now Jack has learned about Allie Nguyen (Kelsey Wang). Jack went to Phyllis for advice on what to do about Allie. Phyllis encouraged Jack to reach out to his granddaughter.

Plus, Jack keeps talking about how wonderful and supportive Phyllis has been. Meanwhile, Amanda Sinclair (Mishael Morgan) keeps pushing Phyllis to rekindle her romance with Jack. So, it seems that the soap writers intend on bringing “Phack” together again.

Jack’s mystery will have another layer added to it. If Keemo’s death and meeting Allie weren’t enough, Jack will get a blast from the past. It seems Diane has been involved in getting Jack and Allie to connect. Jack will be stunned when he sees Diane because she died several years ago.

The Young and the Restless spoilers reveal that the soap released a special promo featuring Diane. The clip teased the return of the “ultimate bad girl.” Scenes of Diane denying stalking Jack were shown. Phyllis was blurting out that Diane is the problem. Plus, fans got to see some scenes of Phyllis and Diane’s war from back in the day.

It is teased that Diane and Phyllis’ war will be reignited. There is reason to believe that Diane plotted Jack and Allie’s meeting for a reason. Diane probably wants to use this as a redemption tactic and to win Jack back. However, Phyllis doesn’t back down from a fight. Plus, Phyllis having competition could make her realize how much she loves Jack.

Fans should expect Diane to be on her best good girl behavior in the beginning. However, those epic bad girl claws will soon emerge! Which woman do you think will win Jack’s heart in the end?