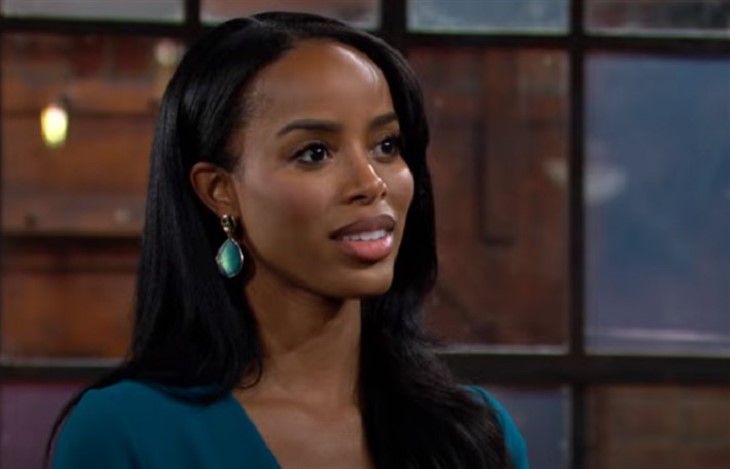 The Young and the Restless spoilers reveal that Elena Dawson (Brytni Sarpy) is asked to come to Chancellor-Winters to do a series of medical podcasts. However, that means Elena needs to get out of her contract with Newman Media. Nate Hastings (Sean Dominic) asks Imani Benedict (Leigh-Ann Rose) to make it happen. However, Imani could sabotage Elena’s career.

The Young And The Restless Spoilers – Betraying Devon Hamilton

Y&R spoilers reveal that Nate prematurely announced the 50-podcast project at the Chancellor-Winters launch party. Even though Devon Hamilton (James Bryton) wasn’t happy, Lily Winters (Christel Khalil) thought Nate’s gut paid off. Of course, this was set in motion by Imani, who wants to prove how good she is for Nate.

During the week of June 27, Elena will be sent to Hawaii to attend a medical conference. While Elena is gone, Devon wants Imani to work on the Newman Media contract. Nate plans on surprising Elena when she comes back with a contract for her to do podcasts exclusively for Chancellor-Winters.

The Young And The Restless Spoilers – Imani Benedict’s Sabotage

The Young and the Restless spoilers reveal that Nate turns to Imani to get the contacts taken care of. Nate and Devon know that there might be a price to pay for getting Elena out of her Newman Media contract. However, they probably assume it will be a reasonable amount.

Now, when Imani learns that Elena will be coming to Chancellor-Winters, she knows that means trouble for her. Imani will have fewer opportunities to flirt with Nate. Plus, she doesn’t want Elena breathing down her neck as Amanda Sinclair (Mishael Morgan) is already doing it.

It’s possible that Imani could sabotage Devon and Nate’s plan for Elena. Imani might claim that it will cost millions of dollars to get Elena out of her Newman Media contact. Imani will use something to make it a bad decision to steal Elena from Newman Media.

Of course, Imani is a lawyer while Nate and Devon are not. So, they might trust what Imani says about the contract – even if it’s an exaggeration or outright lie. Of course, this all happens while both Elena and Amanda are out of town.

So, Imani might win this battle but eventually, everyone is going to find out that it was all just a scheme to keep Elena and Nate apart. How will Nate deal with that bombshell and could there be consequences for Imani? What if Nate and Devon ask Amanda to go over the contract afterward? We will have to keep watching the CBS soap to see what happens next with this storyline.