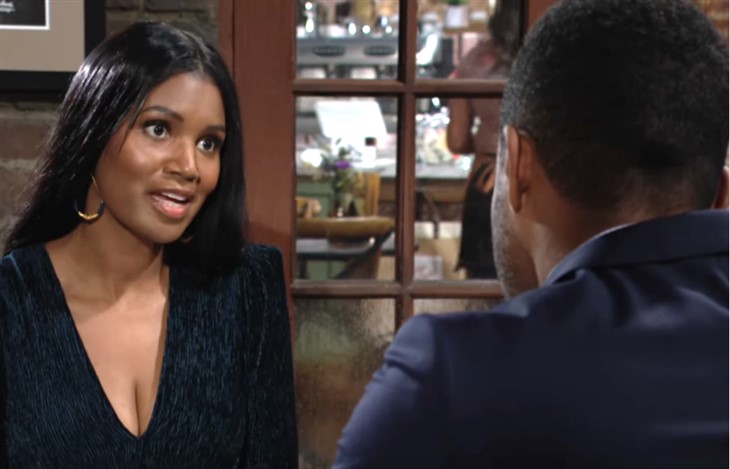 The Young and the Restless spoilers show that no matter what Nate Hastings (Sean Dominic) does, he cannot seem to win with Devon Hamilton (Bryton James). As he told Imani Benedict (Denise Boutte), he has tried playing by his rules and even going against them, but there is nothing that works.

This has caused Nate to lose his patience as he walked out of a video conference with everyone, including Jill Abbott (Jess Walton), and makes a little bit of a scene before telling Elena Dawson (Brytni Sarpy) that he was done and he was not going to do this anymore.

Using her power for ill-will, Imani has seemingly convinced Nate to stay on at Chancellor-Winters and maybe even try a little bit of a different approach. Imani has been a snake in the grass the entire time, but she may actually be able to help and convince Nate to do something interesting.

While the back and forth between him and Devon, The Young and the Restless spoilers show have been a bit boring, watching Nate stick it to his cousin may be pretty interesting, plus, it leaves a lot of room for more drama between Imani, Nate, and Elena. Potentially, even another moment of infidelity and this time, Elena will know what it feels like.

While Imani was vague in her suggestion, she said something about being a bit more ruthless, something that Nate has never really had to be in his life. While he would rather take the “L” and move on with his life, Imani is absolutely going to convince him to take the fight to his cousin and earn his spot among them.

This will not be an easy task though, which has me believing that what she means by “ruthless” is going behind everyone’s back and doing whatever it takes to make himself higher than Devon in the company. If Nate can pull off this kind of takeover, he can okay all of his own events, and prove to Devon that he knows what he is doing.

Unfortunately, I don’t think Nate has the stomach for this, and he will leave Imani out to dry when they get caught trying to pull this off.

What do you think? Will Nate and Devon resort to throwing fists again? If Nate actually fights back this time, will Devon be flattened? Share your thoughts and remember to keep watching the CBS soap to see what happens next.

B&B Spoilers: Steffy Needs To Back Off