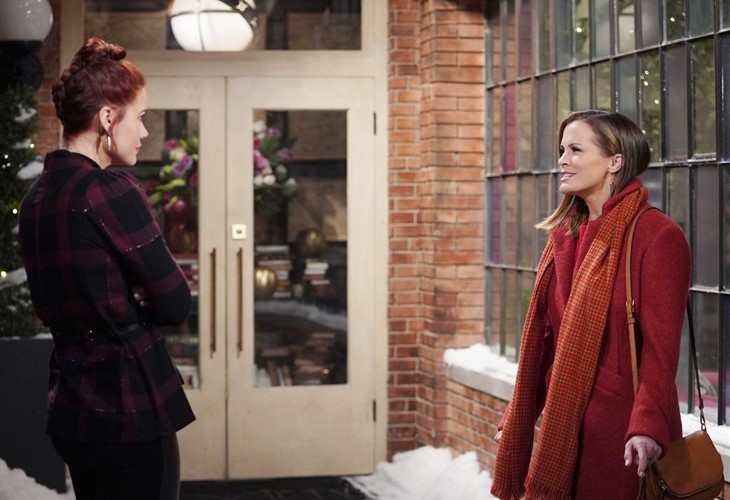 The Young and the Restless (Y&R) spoilers reveal that Victoria Newman-Locke (Amelia Heinle) is now Adam Newman’s (Mark Grossman) boss. However, that doesn’t mean Adam is going to take orders. It is teased that Victoria does Chelsea Lawson (Melissa Claire Egan) a favor by firing Sally Spectra (Courtney Hope). Then, Chelsea finds her own job in jeopardy.

The Young And The Restless Spoilers – Sally Spectra Blindsided

Y&R spoilers reveal that Sally is blindsided by Chelsea. There is a major rivalry between the two. Chelsea can’t seem to stop Adam and Sally from being friends or lovers. So, Chelsea plans on making Sally’s life even more difficult.

Chelsea edits Sally out of all the fashion designer interviews she conducted in New York. Remember, Chloe Mitchell (Elizabeth Hendrickson) made Sally the face of the fashion platform. So, Sally takes great offense to Chelsea doing this. However, that is just going to be the tip of the iceberg.

The more Chelsea pushes, the more Sally will fight back. So, Chelsea might think the only thing left to do is get rid of Sally permanently. No, we aren’t talking about murder. Chelsea could turn to the new owner of Newman Media for help. Chelsea might plead her case and Victoria could agree to fire Sally.

It is teased that Adam will come to Sally’s rescue. So, he likely won’t stay silent when Sally loses her job. Adam knows that the rivalry is out of control. However, Adam also knows that the fashion platform is doing amazing for Newman Media. The reason has nothing to do with Chelsea as she hasn’t done any actual work since coming on board. Like it or not, all of Newman Fashion’s success right now is because of Sally.

The Young and the Restless spoilers reveal that February sweeps state that Chelsea and Chloe will find their careers in jeopardy. So, Adam and Victoria could get into a huge fight over Sally’s termination. Adam might rehire Sally and threaten to fire both Chelsea and Chloe. It will be a tug-of-war with none of the trio knowing whether they are staying or going.

The only solution will be for the three to grow up and act like professionals. That means getting alone while they are on the clock.

It is confirmed that Adam will stay on board due to Victor Newman’s (Eric Braeden) ultimatum. Adam will find it hard to have Victoria as his superior. However, that doesn’t mean he will make things easy for Victoria. This is just the beginning of the power struggle and it is teased to become very dangerous.