Y&R Spoilers: Does Nikki Get The Dirt She Needs 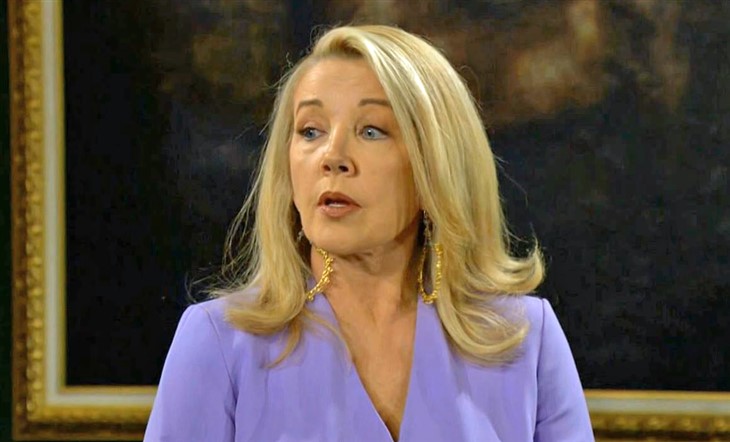 The Young and the Restless (Y&R) spoilers for Friday, October 7, 2022, reveal Nikki Newman believing she has finally hit paydirt.

The Young And The Restless Spoilers – Who Is Nikki Newman’s Guardian Angel?

For months, all Nikki Newman (Melody Thomas Scott) and Phyllis Summers (Michelle Stafford) could think about was digging up enough negative info on Diane Jenkins (Susan Walters) so that they could run her out of town once again and make Jack Abbott (Peter Bergman) see the light about her.

Nikki even took a trip to Los Angeles to meet with Deacon Sharpe (Sean Kanan), the man who helps Diane fake her own death all those years ago. She made a passionate plea for Deacon’s help and he agreed to see what he could do so Nikki left LA with a wedding dress for Summer Newman Abbott (Allison Lanier) and reassurances that her plan might work.

On Friday, Nikki gets some dirt from an unexpected source, so something tells us it’s not Deacon who comes through. With Tucker McCall’s (Trevor St. John) past connection to Diane, could he be the person who brings Nikki what she needs?

Billy Abbott’s relationships with both Lily Winters (Christel Khalil) and Chelsea Lawson (Melissa Claire Egan) have been causing him headaches and drama. He is still committed to Lily but she does not like all the time he spends with Chelsea — time he should have given up now that they are no longer doing that ridiculous podcast together.

When Billy makes a promise on Friday, it doesn’t look as if it will go over well for him. Does he promise Lily something that he just can’t deliver on as usual and does it have to do with Chelsea?

Meanwhile, Chelsea feels like one big tale of woe. Yet another one of her plans backfires in her face and it seems she might not get everything she wants after all. Chelsea has been at a crossroads for quite a while as she’s alienated Genoa City player after Genoa City player. Will she finally learn her lessons and turn over a new leaf? She’s tried many times before, but somehow has never succeeded. Stay tuned to The Young and the Restless weekdays to see how these stories play out.

Days of Our Lives Spoilers: EJ DiMera Learns The Truth About Johnny

B&B Spoilers: Brooke’s Not About To Let Ridge Go So Fast