Y&R Spoilers: Do Phyllis And Diane Call A Truce? 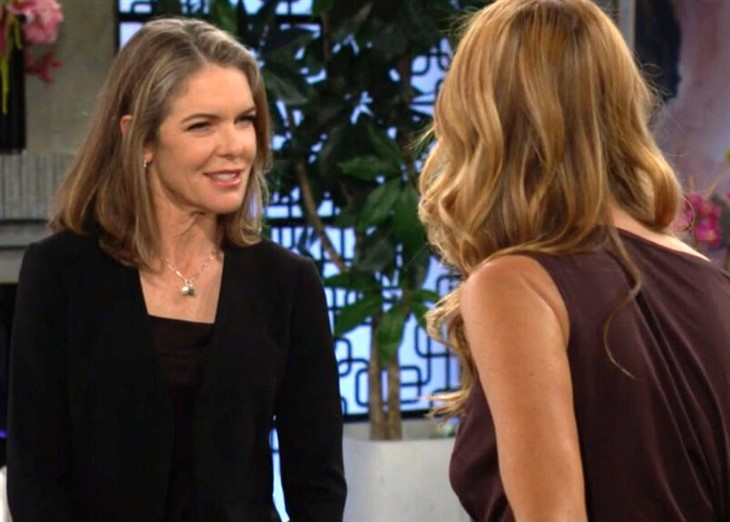 The Young And The Restless Spoilers – Phyllis Summers Shows Her Face

After walking around town a bit in a humongous hat and sunglasses, Phyllis Summers (Michelle Stafford) finally decides to come out of hiding and has a long talk with Diane Jenkins (Susan Walters). To show Summer Newman Abbott (Allison Lanier) that she means business, she offers to let bygones be bygones with Diane and tells her she is sorry for the way she’s been acting. The past is the past, right? And Phyllis has sure had a checkered one herself.

Needless to say, Diane is quite taken aback by this but figures she may as well accept Phyllis’s apology and see what happens. This was unexpected, but it could all work out just the way she wanted it. Next, Phyllis must talk to Jack Abbott (Peter Bergman) and beg for mercy. But will he even see her if she asks? That may depend on what Diane says to him.

Yes, Diane can’t wait to run to jack and tell him all about what is going on with Phyllis. He’s quite perplexed and has to decide whether to see her when she sends a text. He was furious at her the last time he saw her, but Jack can’t ever seem to quit Red. The biggest question on everyone’s mind is when Phyllis will screw things up again.

Does Victoria Newman Locke (Amelia Heinle) really think she will be free of her father and his reach just by taking off to New York with Ashland Locke (Robert Newman)? Well, she declared herself independent and able to make her own decisions, even if her decision is to stay with a man who lied to her about having cancer. She even thinks she can start her own business without her father interfering. She is just that clueless.

Well, she is about to learn how wrong she is the hard way when The Great Victor Newman (Eric Braeden) puts yet another plan in action to make sure Victoria doesn’t succeed in business no matter how hard she tries. He’s just that ruthless. Stay tuned to The Young and the Restless weekdays to see how these stories play out.

Days Of Our Lives Spoilers: Sami’s Getting Awfully Suspicious