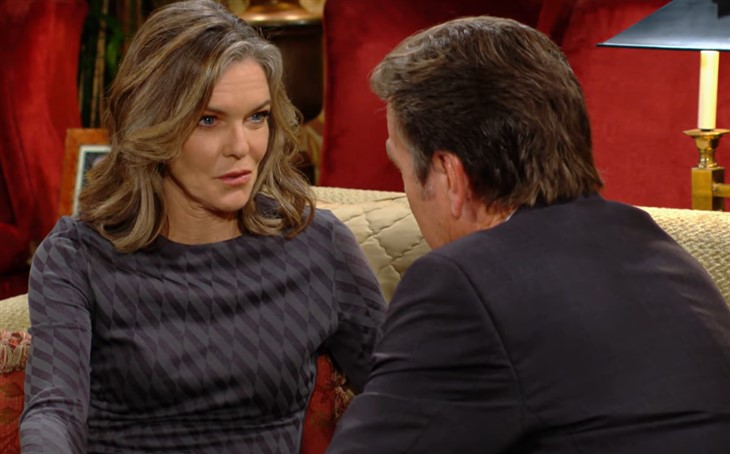 The Young and the Restless (Y&R) spoilers show that Diane Jenkins (Susan Walters) might be getting something stuck in her mind and actually believe that she has changed for the better since coming back to Genoa City.

While it is unfair for me to assume that Diane is lying and faking her way through everything, it feels like she has put forward a very serious effort to be a positive impact on her son, Kyle Abbott’s (Micheal Mealor) life. However, with a journalist coming to town for her story and everyone else constantly trying to shove her out, it’s going to be a tough road for her.

It looks like Diane is going to try to win back the heart of Jack Abbott (Peter Bergman), the man she abandoned, and broke the heart of decades ago.

The Young And The Restless Spoilers – Getting A Little Ahead Of Herself?

If the heat around her continues to turn up, she will be looking for someone that can protect her and manipulate them with everything she has. While it seems she has won her son back over, she is still desperately trying to get Jack back, and all infront of Phyllis Summers (Michelle Stafford), who looks on in disbelief.

However, it might be a bit hard to convince Jack that she has completely changed and wants to restart their life together, especially after everything she put them through. If anyone could do it though, it would probably be Diane.

Y&R Spoilers – Would Jack Abbott Take Her Back?

With all the questions focused on Diane, we need to ask some about Jack. Let’s be honest now, because I think Jack could definitely be duped again. If there was ever a man to try to dupe into a relationship, it’s Jack Abbott. It may sound mean, but the guy has been to Brokenheartsville more than anyone else we know.

There’s a very real possibility that Jack would see everything she has been doing lately and believe that she really has changed as a person. If that was not enough, don’t worry, because he’ll have the constant complaining from Phyllis to help him balance it out. I think Phyllis will end up being her own worst enemy and actually pushing Jack back to Diane without even realizing it.

Jack… I have two words for you. Watch out.

What do you think? Is there a chance that Jack would take Diane back into his life like that? Let us know in the comments below.