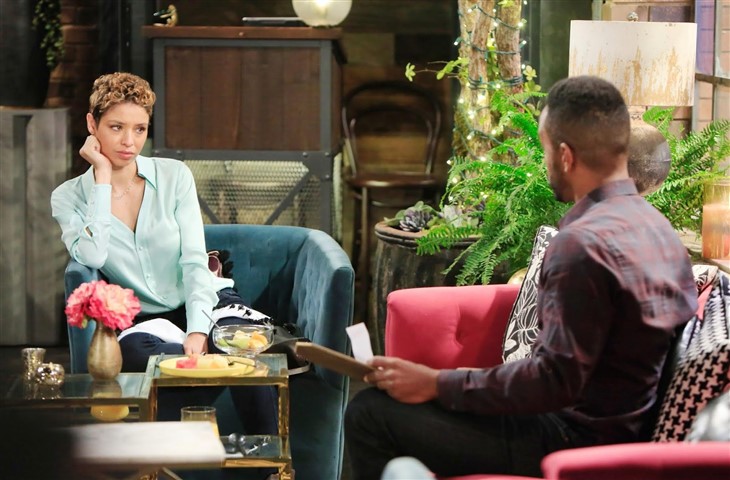 The Young and the Restless (Y&R) spoilers for Friday, August 12, 2022, reveal Elena having enough of yet another enemy for a man.

Elena Dawson (Brytni Sarpy) has already been through this with one man and she is not going to go through it with another. She could see how much attention Devon Hamilton (Bryton James) was paying to Amanda Sinclair (Mishael Morgan) and it drove her right into Nate Hastings’ (Sean Dominic)arms. Perhaps she shouldn’t have had an affair, but she was right about Devon and Amanda.

And now she feels she is right about Imani Benedict (Leigh-Ann Rose) trying to interfere with her relationship with Nate and can’t believe that Nate’s eyes aren’t open to what’s been going on. Imani has been playing games with both of them and Elena knows it. She just has to make Nate see that light.

The problem is, that Nate has been very stubborn of late and thinks Imani always gives him the best advice in life. Maybe he should listen to his girlfriend because she has been right about these types of things before and she has some very good points about Imani.

Now that Chelsea Lawson (Melissa Claire Egan) has been growing closer to Billy Abbott (Jason Thompson) via their weird little late-night podcast, she gets to guts to ask for something she has wanted for a very long time. She wants Johnny Abbott to know she is his mother.

This would be seismic in Victoria Newman’s (Amelia Heinle) and Billy’s lives as Victoria has always thought of Johnny as her own and Johnny has never known any other mother. But with Chelsea at this big crossroads in her life, she is clearly thinking about the first little boy she gave birth to.

Will Billy actually go along with this idea? He never thought Chelsea would ask for this again and he’d have to go through Victoria first.

It looks like Mariah Copeland’s (Camryn Grimes) idea for Kyle Abbott (Michael Mealor) to give Tessa Porter (Cait Fairbanks) something to do now that she can’t sing pays off. Like others in town, she gets a job at Marchetti she is not remotely qualified for, but at least she has a new focus in life. Stay tuned to The Young and the Restless weekdays to see how these stories play out.