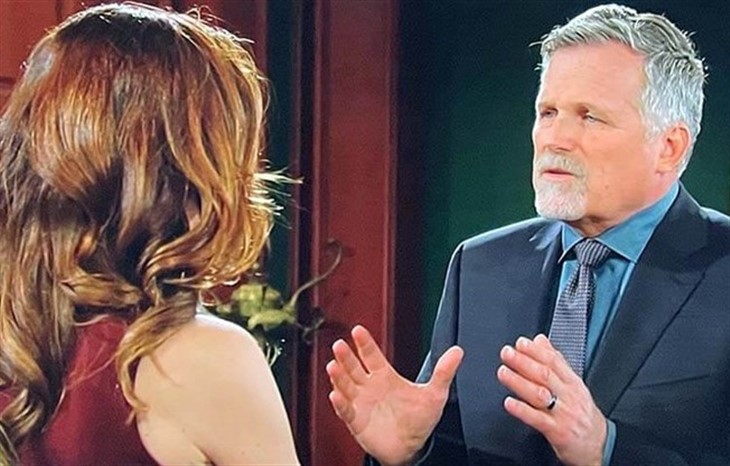 The Young and the Restless spoilers reveal that Ashland Locke (Robert Newman) throws a curveball. Ashland seems to be figuring out that Victoria Newman-Locke (Amelia Heinle) is pushing her plan a bit too hard. Victoria is blindsided by Ashland’s next move. Then, Adam Newman’s (Mark Grossman) timing blows Victoria’s plan to smithereens.

The Young And The Restless Spoilers – Victoria Newman-Locke’s Bait

Y&R spoilers reveal that Victoria kept telling her family that she had a plan to deal with Ashland. At first, Victoria kept this plan to herself. Then, she told Adam, Victor Newman (Eric Braeden), Nick Newman (Joshua Morrow), and Nikki Newman (Melody Thomas Scott) her idea. It would require Adam to be the fall guy, Then, Victoria set the bait for Ashland.

Ashland seemed to fall for Victoria’s insistence that Adam must be the person who framed him. As expected, Ashland broke into Adam’s office. It was assumed that Ashland was going to plant evidence. However, it seems that Ashland didn’t do that but was actually looking for proof on Adam’s laptop.

Once Ashland heard Adam and Sally Spectra (Courtney Hope) outside the office door, he panicked. Ashland was already uncertain of Victoria’s claim that Adam was behind the whole thing. After nearly getting caught by Adam and Sally, Ashland spent a lot of time thinking about the situation.

The Young And The Restless Spoilers – Ashland Locke’s Curveball

The Young and the Restless spoilers reveal that Ashland throws a curveball. Ashland tells Victoria that he couldn’t find any evidence on Adam’s computer. So, this definitely catches Victoria off guard as she expected him to plant evidence. Then, Victoria kept pushing her agenda by saying they just need to dig deeper.

However, Ashland said no and suggested they do something else. Surprisingly, Ashland doesn’t want to go after Adam and is willing to leave Newman-Locke. In addition, Ashland wants to start over somewhere new with Victoria. However, it would require Victoria to walk away from her family.

This has Victoria wondering if she and her family really are wrong about Ashland. Victoria admits to Nikki that she believes Ashland’s intentions are genuine. However, it is more likely that Ashland has figured out he’s being bamboozled by Victoria.

Ashland might really be in love with Victoria, an unexpected snag in his original plan. At the same time, Ashland knows the Newman family won’t’ give up until he’s out of the picture. This could just be Ashland’s way of keeping his marriage and not having to deal with any more interference from the Newman family.

If Ashland had any doubts about Victoria, Adam’s bad timing just confirms it to Ashland. Adam confronts Ashland at the coffee shop. Ashland tries to excuse himself, but Adam says he has an offer for him. That is when Adam says he will give Ashland half a billion dollars if he walks away from Victoria and Newman-Locke. Adam has no idea that Ashland is already suspicious. Adam’s bad timing could blow Victoria’s plan to smithereens.

Ashland doesn’t like being manipulated even though he manipulates everyone else. So, will Ashland try to sweep Victoria away from Genoa City and her family? Or could he get the best of both worlds by taking Adam’s offer, then leaving town with his wife? It would give Ashland both money and the woman he loves. As a bonus, he would get Victoria away from her interfering family. We will have to keep watching to find out!