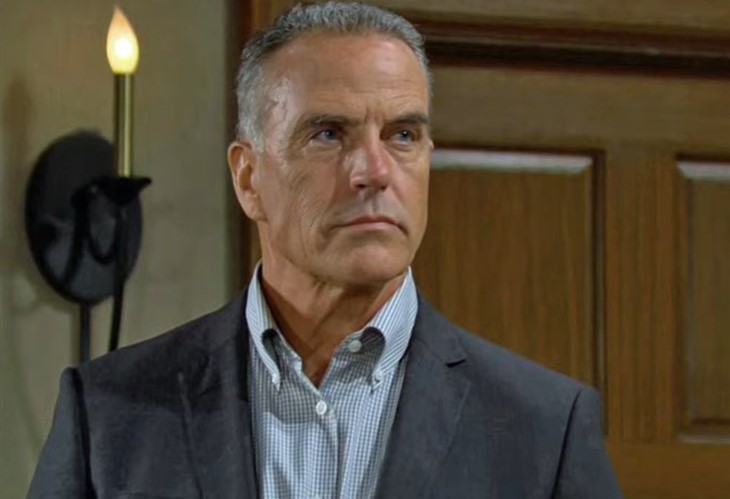 The Young and the Restless (Y&R) spoilers reveal that Victoria Newman (Amelia Heinle) is having trouble in paradise with new hubby Ashland Locke (Richard Burgi). The newlyweds are back in Genoa City, Wisconsin, and lo and behold he doesn’t seem to be dying after all! What gives, Victoria married and merged with the guy thinking he was a goner. Nope, not only is he alive, the Locke Ness Monster is about to roar!

According to our inside source at CBS, Ashland is far from dead in the water business wise, he’s planning to pull the con of a lifetime over on Victoria and her dad Victor Newman (Eric Braeden). The question is will he live to tell the tale, theoretically speaking of course.

The Young And The Restless Spoilers – Ashland Locke Is Not Dead

Vashland had the wedding of the year in Italy, and Ashland managed to pull off a few chest heaves and breathing difficulties, indicating that he was suffering the effects of being diagnosed with a life threatening illness. The guests were teary, Victoria was beautiful and her heroic brother Nick Newman (Joshua Morrow) was villainized for trying to save her from certain doom. It turns out Victoria may need to offer up an epic apology to her bro, it seems he was right about nasty Ashy all along.

Y&R spoilers – Victoria Newman Is All Puffed Up

Fast forward to the present day and Victoria and Ashland are tripping all over each other as they try to be co-titans in the boardroom.

The tension has been high as Victoria scolds Ashland for trying to be the boss and actually make decisions, while Ashland is not used to being treated like a boy toy. Our insider at CBS hints that Ashland will vent his frustrations at being marginalized by double crossing Victoria and Victor.

There’s only one problem for Ashland, Victor is one step ahead of him, having Michael Baldwin (Christian LeBlanc) dig into his past. This battle of wits portends some mighty fine drama in the coming days as February Sweeps gets underway. By the way, Richard Burgi has departed the role of Ashland and former Guiding Light star Robert Newman (Josh Lewis) will soon appear in the role.

Tell us who you think gets the upper hand at NE Y&R fans!

90 Day Fiancé: Ella Proves Her Relationship With Johnny Is Getting Stronger