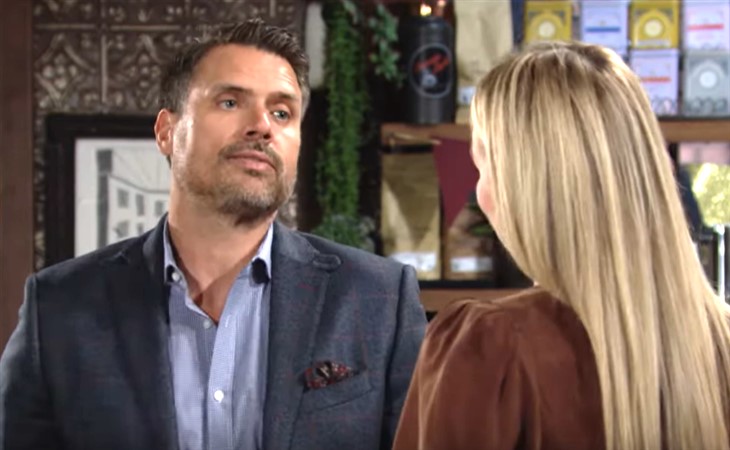 The Young and the Restless (Y&R) spoilers for Friday, August 5, 2022, reveal Nick and Sharon growing closer, but will it lead to something more?

The Young And The Restless Spoilers – What Will Nick Newman Say?

Sharon Collins (Sharon Case) has certainly been the woman everyone has gone to with their problems since Rey Rosales (Jordi Vilasuso) died in March. It looks like Sharon’s only purpose as a widow is to dole out advice and pour coffee to everyone in town, but she always has a special place for Nick Newman (Joshua Morrow).

Well, Nick has been going through some things of late, namely punching Ashland Locke (Robert Newman) in the face and apparently killing him while doing so. Does Nick get brave enough to tell Sharon what has been going on and how Victor Newman (Eric Braeden) decided to become involved?

Will that then make her an accomplice? Why would Nick even do that to his ex-wife? Perhaps he just tells her a vague story just to get some of it off his chest, but this will certainly make Sharon suspicious that something much more is going on.

Nick isn’t the only hot mess Newman sibling with now. Victoria Newman (Amelia Heinle) is also practically losing it after what happened to Ashland right in her living room. So, Billy Abbott (Jason Thompson) decides he is going to be there for his ex and the mother of his children and give her some comfort.

Will that prompt Victoria to just break down and tell him what really happened? That would then make Billy into an accomplice but it will also make his story a lot more interesting than just doing a podcast with Chelsea Lawson (Melissa Claire Egan).

The Young And The Restless Spoilers – What About Abby Newman?

There’s another Newman sibling who needs a story and that is Abby Newman Chancellor (Melissa Ordway). Well, on Friday she finds Chance Chancellor (Connor Floyd) in a compromising position so that might be the story she needs. What might Chance be up to? Certainly, this has to involve a case — perhaps the Ashland case — and not another woman. Maybe it could also have something to do with his PTSD. Stay tuned to The Young and the Restless weekdays to see how these stories play out.

Days Of Our Lives Spoilers: Will Leo And Gwen Turn On Each Other?

B&B Spoilers: Everyone’s Mind Is On Taylor And Ridge