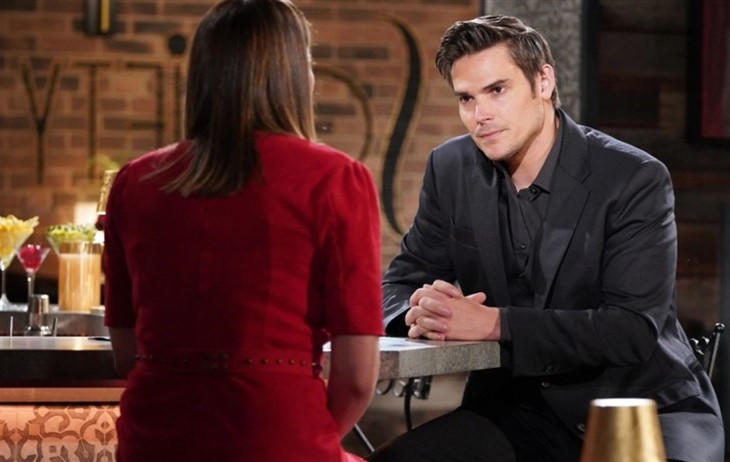 The Young and The Restless (Y&R) spoilers and updates tease that Adam Newman (Mark Grossman) and Chelsea Lawson (Melissa Claire Egan) clash. She’s alienated their son Connor Newman (Judah Mackey) with her parenting choices, and they are in for a big time argument over it.

The Young And The Restless Spoilers – You Can’t Do That

Adam tells Chelsea she can’t do that, meaning expecting Connor to accept a half-brother he’s always known as his cousin; Connor is asking Adam a lot of questions. Connor is old enough to understand that his mother almost broke up his aunt Victoria Newman’s (Amelia Heinle) marriage by making Johnny Abbott (Paxton Mishkind). Connor has lost all respect for his mother and as for Johnny, Victoria and Billy Abbott (Jason Thompson) have put a stop to Chelsea’s visits to him.

Adam is dealing with the fallout of Connor being told his mother slept with his aunt’s ex-husband and Connor rejects her totally now. Adam doesn’t want to hear it and wants their son to stay with him for a while like when Chelsea was in the hospital.

Adam says Connor now needs therapy again, Chelsea has messed him up so bad with her choice to reunite her sons, and for once he and Victoria agree on something. Victoria thinks that Chelsea’s insisting on being a co-mother to Johnny is only a way to try and get Billy back as a boyfriend. Chelsea was unduly upset when Billy stopped “The Grinning Soul” podcast and refused to take it on by herself, and that told the real tale. They haven’t even spoke to Billy’s live-in girlfriend Lily Winters (Christel Khalil) about the problem, she’s got enough to deal with it the way it is. She and Billy are both very involved at work with the impending IPO of Chancellor-Winters.

The Young And The Restless Spoilers – Sharon Rosales Available

Even Sharon Rosales (Sharon Case) has noticed that Chelsea is not herself and struggling since Rey Rosales (Jordi Vilasuso) died. Rey was trying to be a good friend but Chelsea was taking him wrong, and she called Chelsea on it the night Rey died, reminding her Rey was married. Adam broke form to talk to Sharon, which he tries to avoid considering their past with each other, about Connor.

Sharon is appalled to hear what Chelsea has done to both boys with demanding they know the truth about her being Johnny’s mother. She’s able and available for Connor and Johnny as well if Billy and Victoria want her help.

B&B Spoilers: Do Thomas And Hope Reach A Truce?