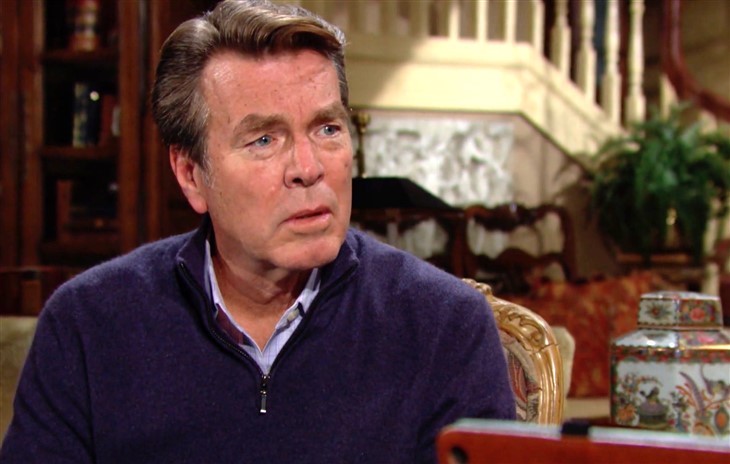 The Young and The Restless spoilers and rumors tease that a mystery person who knows about Jack Abbott, (Peter Bergman) Allie Nguyen (Kelsey Wang) and Keemo Volien Abbott (Philip Moon) and his history with Jack had to have texted Jack to come to Los Angeles. Viewers of the Young and The Restless wonder if maybe it’s Keemo himself, and he’s faked his death!

This mystery person also has a key to Keemo’s house and had a photo of Allie with her phone number on it, and obviously knows Keemo’s name change and may have put up the memorial page listing no survivors! But viewers of The Young and The Restless will see that Allie has no clue whose phone number the texts to Jack is, or who else would have a key to her late father’s house, who had changed his name to Hao Nguyen.

Allie will be frustrated, not want to accept Jack as her grandfather at first and she will be angry that he intruded into her father’s house and went through his things, but gradually she will calm down. Allie will become as curious but yet concerned as Jack and Phyllis Summers (Michelle Stafford) are as to who this mystery person is who wanted to get them to meet! The house is being painted and readied to sell, but who has this extra key- the realtor has a lockbox that goes on the door with its own key and so do the painters!

Viewers of The Young and The Restless can imagine that Jack, Phyllis and Allie wonder who this person is who is going to a whole lot of trouble, yet seems to wish to remain anonymous! Creepy thoughts come to their minds as they realize that the only person who would have all this information would be Keemo, aka Hao Nguyen; but aside from him being dead, the possible motive makes no sense either even if he wasn’t.

Then the memorial page, which has the name Hao Nguyen doesn’t list any survivors, and that only adds to not only the mystery, but the downright creepiness of it all; Allie’s aunt, Mai Volien (Marianne Rees) and Allie are Hao Nguyen’s survivors, other than Allie’s mother, his ex-wife. Viewers of The Young and The Restless will recall Allie seeming to be rather antagonistic towards her as she first met Jack and Phyllis and Jack revealed who he was!

The Young And The Restless Spoilers – Has Keemo Abbott Faked His Own Death And Trying To Get His Father And Daughter Together?

Perhaps Keemo has faked his own death for some reason and wanted to get his father and daughter together in an effort to protect Allie. Whether Keemo got along or didn’t with Jack, and the years of alienation put aside, when it comes down to it if Keemo got in some trouble with dangerous people he’d know that Jack would protect Allie!

If Keemo had to fake his death out for that kind of reason, he would have no other way to reach out than anonymously, leaving the box of unsent letters as an explanation and so Jack knew he was working on forgiveness. Viewers of The Young and The Restless know there would be no other way to get Jack and Allie together and if he faked his death that may be why his obituary stated no survivors – at least not as Hao Nguyen! Keemo could be in witness protection or any number of scenarios – he would have all the information and a key to the house!