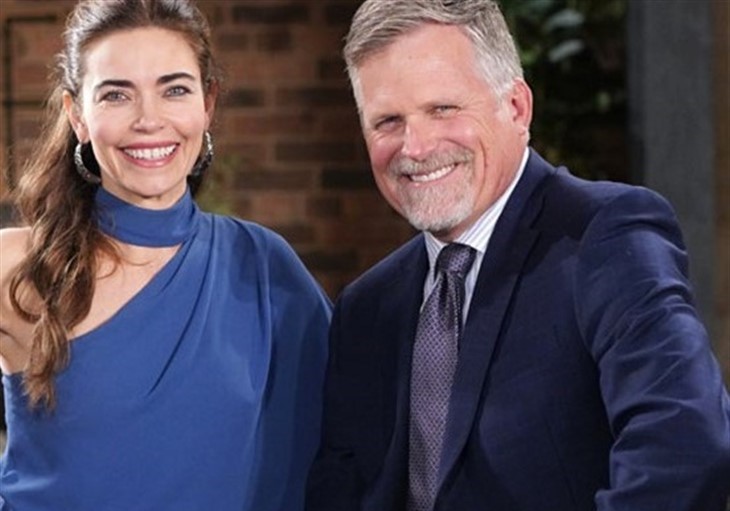 The Young and the Restless comings and goings reveal that Ashland Locke will have a whole new look on Wednesday, February 9, 2022, when Robert Newman takes over the role from Richard Burgi.

Just as more of his secrets are about to come out, Ashland Locke will undergo a big change when Robert Newman assumes the role after the soap felt the need to let Richard Burgi go after he accidentally violated their COVID protocols. Burgi had tested positive during the holiday break from the show and used the studio’s testing system to make sure he was negative before he returned to work. He was following new CDC guidelines with his quarantine time, but the soap had not adopted those guidelines and still required a 10-day quarantine.

Soon after Burgi announced he was let go, fans learned that veteran soap star Newman would be taking over the role of Victoria’s (Amelia Heinle) new husband just at a time when she may learn she never should have trusted him at all.

Guiding Light fans will remember Newman from his many years as the mega-popular Josh Lewis on the now-defunct CBS soap where he was paired up with Kim Zimmer’s Reva Shayne. After years away from a soap set, Newman was shocked to get the call about playing Ashland and had to make a decision on whether it was something he wanted to do, as it would require him working in LA when he lived on the East Coast. Now, he just wants to make sure he does the job right.

“I know recasts can be really difficult for fans,” he said in the February 15, 2022, issue of Soap Opera Digest. “I’m anticipating that there will be some level of disappointment for some people. I’ve watched other actors who are recasts go through difficult times with fans and I hope it doesn’t go that way for me…My job is to interpret the material I am given to the best of my ability…I’m just trying to honor the character and the writers’ intent to the best of my ability. It might be different and it might be a little rocky for the first period of time.”

He then urged fans to be gentle on him as Ashland has to explain his secrets and lies once again this week. Stay tuned to The Young and the Restless weekdays to see how Ashland has changed.