The Bold And The Beautiful Spoilers: Carter Has Shocking News About Quinn 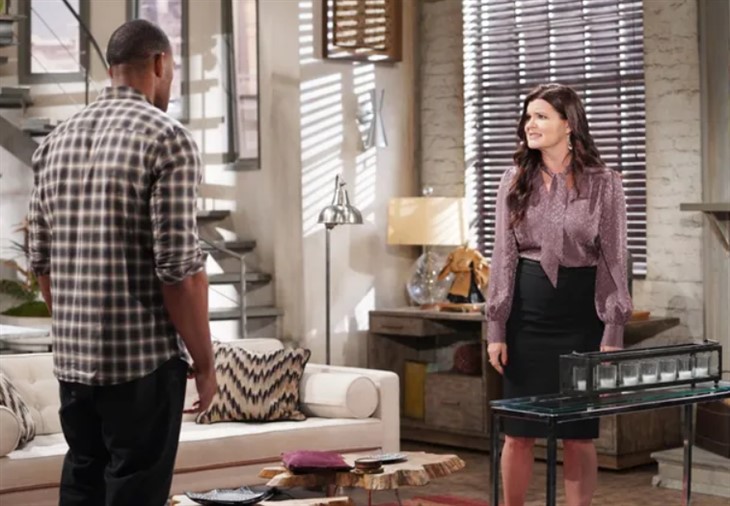 The Bold and the Beautiful spoilers for Monday, October 17, 2022, reveal Carter opening up to Katie and letting her know some stunning news.

Katie Logan (Heather Tom) was right to wonder if Dollar Bill Spencer (Don Diamont) would still want her if Brooke Logan Forrester (Katherine Kelly Lang) were available because the second he learned that Ridge Forrester (Thorsten Kaye) dumped Brooke, Bill was right there with his arms around her sister while Ridge laid there wondering if he should have just slept with Taylor Hayes (Krista Allen).

So, when Katie confides in Carter Walton (Lawrence Saint-Victor) about what has been going on with Bill and how she can’t trust him, Carter has his own confession to make. Just like Brooke, he is suddenly single again, too.

Wait, what? How is Carter single again when he finally got together with Quinn Fuller (Rena Sofer) and they were so happy? She even interrupted his wedding and made sure he didn’t marry Paris Buckingham (Diamond White), so Katie can’t believe what she is hearing.

However, it’s all true. Quinn just up and left Carter and left Los Angeles and he has no idea where she is. Carter is shocked and heartbroken and has been keeping this to himself and is happy to finally have someone to talk to about this.

Katie might want to say ‘I told you so’ (as we are sure Brooke wants to do as well, considering how much she hates Quinn), but Katie is there as a friend to Carter and may even become more than a friend when she gets ready to make a daring move.

This soap tried to play up this odd friendship between Carter and Katie before but that was a year ago and it never went anywhere. We guess since Rena Sofer decided to leave the soap, we might have something for Heather Tom to do once again. But we still want to know why they chose this way to write off Quinn. It certainly doesn’t do her character and time on the soap justice. Stay tuned to The Bold and the Beautiful weekdays to see how these stories play out.

The Young And The Restless Spoilers: Sharon Has Some Serious Words For Nick