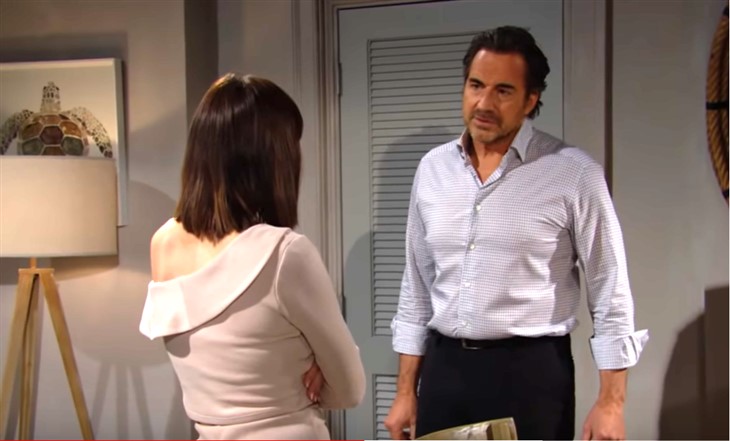 The Bold and the Beautiful spoilers document that Ridge Forrester (Thorsten Kaye) and Taylor Hayes (Krista Allen) finally reunited. Whether they remarry is yet to play out.

But a more surprising drift is occurring in this version of Los Angeles, California. Hope Spencer (Annika Noelle) is mad at her mother for interfering in Douglas Forrester’s (Henry Joseph Samiri) life.

While Brooke Logan Forrester (Katherine Kelly Lang) appears to be the victim of a digital frame, no proof yet exists of the villain who framed her. Thomas Forrester (Matthew Atkinson) stands to gain the most, whether he set Brooke up or not.

The Bold And The Beautiful Spoilers – First Shoe Drops In Aspen, Colorado

As viewers await the reveal of who reported Thomas to Child Services for endangerment, Ridge accomplished his mission. He left LA in a huff, fed up with Brooke’s perceived betrayal.

Taylor was not open to Ridge’s arrival, believing that he was using words and did not intend to live by them. Meanwhile, back in LA, Thomas was telling his grandfather, Eric Forrester (John McCook) and Donna Logan (Jennifer Gareis), whose voice was also recently sampled by Douglas, using a voice-altering application, that this time is different for his parents.

The first effect of converging storylines is the end of Bridge.

Liam Spencer (Scott Clifton) has been uneasy for a while. He knows that Thomas managed to get inside Hope’s head since the recast to Atkinson and Samiri took place in 2019.

Thomas finagled a connection with Hope by encouraging a bond between her and his son. Hope’s agreement to adopt Douglas led to him living with her, Liam, and Beth Spencer (Madeline Valdez and River Davidson) for some soapy years. It was less than that in real-time.

Hope recently seemed to find Thomas to be not only a sympathetic character but also one she finds herself physically drawn to. Step two projects as Hope’s head turns from Liam to Thomas. If realized, this will be an earthquake event.

The Bold And The Beautiful Spoilers – When Will Brooke Logan Forrester Be Cleared?

The question the subject header offers is massive. For the moment, Brooke appears guilty, which drove Ridge to Taylor and serves to break Hope’s trust in her beloved mother.

Brooke did not know she was the apparent victim of a setup when arriving in Aspen. She also has no current way of proving her innocence.

The timing of Brooke or some other favorable character realizing the truth and being able to prove it plays directly into the sustainability of Ridge and Taylor’s reunion and whatever may develop between Hope and Thomas.