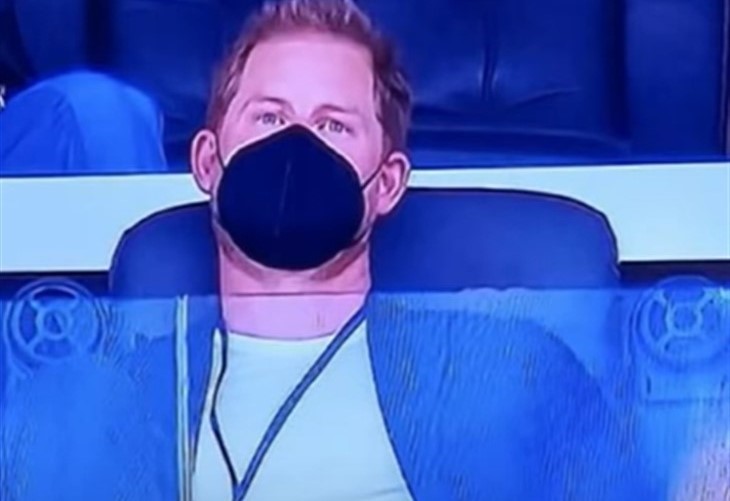 British royal family news reveals that Prince Harry and his cousin Princess Eugenie were photographed at yesterday’s Super Bowl game in Inglewood, California, to the surprise of many. Now a body language expert is spilling the beans on Harry’s insouciant display while masked and without his wife Meghan Markle.

Royal Family News – Harry Is At The Super Bowl

Body language expert Judi James told Express.co.uk that Harry looked like he was, “showing off his new life,” but what about his wife?

Prince Harry and Princess Eugenie were seated next to each other and as if that weren’t odd enough, given the circumstances, their spouses and children were nowhere to be seen.

According to Judi, “Having grown up in the most controversial branch of the royal Firm and lived with family dramas and scandals that are ongoing it’s no surprise that Eugenie and her sister have always excelled at public displays of fierce loyalty and support.”

The scandal she refers to is Eugenie’s disgraced dad, Prince Andrew.

Royal Family News – Andrew Is The Accused In A Bombshell Lawsuit

Andrew is the accused in a sexual abuse lawsuit brought against him in a NYC courtroom by Virginia Giuffre. She has accused him of having sex with her three times when she was a minor and a sex trafficking victim of his friends, convicts Jeffrey Epstein and Ghislaine Maxwell.

Judi said, “These Super Bowl poses with Harry only emphasize a friendship that has looked strong for years then, and perhaps never stronger now that Harry has survived his own personal alienation from the royals.”

She added, “Harry and his cousin have been seen seeking one another out at royal events and sharing moments of eye contact and laughter since they were both small. Some of their first poses together were taken on a skiing holiday together and we could see a young Harry bending down next to his small cousin to place a protective arm around her while William posed with Beatrice.”

Royal Family News – Why Was Harry At The Super Bowl?

Judi went on to say, “The cousins appeared to share a love of a party lifestyle growing up and when she wasn’t being a party-buddy, Eugenie also showed signals that hinted she might have been something of a maternal presence in Harry’s life, too.” The sight of the duo at the championship game was a headscratcher for royal watchers who had no idea that Eugenie was in LA.