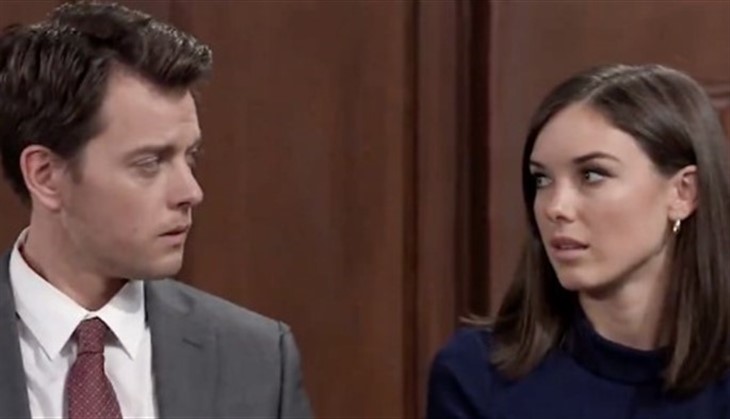 General Hospital (GH) spoilers tease Willow Tait (Katelyn MacMullen) is about to be blindsighted once again. The poor girl has had her fair share of sad surprises, and there’s no sign of that trend coming to a halt. When she finally figures out what Michael Corinthos (Chad Duell) has been up to in his pursuit of taking down his father, mobster Sonny Corinthos (Maurice Benard), she won’t believe the person standing in front of her is the same Michael she fell in love with.

General Hospital Spoilers – It’s All Too Much — Has Willow Tait Had Enough?

As if an unexpected diagnosis of leukemia, following her surprise pregnancy, just after the death of her mom — Harmony Miller (Inga Cadranel) — wasn’t enough of a rollercoaster of emotions, Willow will soon find out there’s more in store for her heart to handle this year. But Willow may not have to walk through the fire of cancer treatment by herself.

A few suitors are showing up in the picture that could be just what the doctor ordered, literally. First up, T.J. Ashford (Tajh Bellow) has been on deck since Willow’s diagnosis as a friendly ear and shoulder to cry on. The secretive nature of their recent conversations about Willow’s illness has led suspicious minds to think something more than friendship is brewing between the two of them. Could there be?

Willow may soon find herself branching out from the hospital and sharing her cancer secret with someone else, but it won’t be Michael. He’s distracted and the secret Willow has kept from him is now adding to the distance between them. Instead, she’ll turn to Harrison Chase (Josh Swickard), her former love that she technically cheated on with Michael. Chase will promise to keep Willow’s secret, and Brook Lynn Quartermaine (Amanda Setton) will be able to tell he’s hiding something. Will her instincts that Chase isn’t being honest lead to her finding out he and Willow have rekindled an old flame?

GH Spoilers — Michael Corinthos Is Too Much Like His Father

Michael has veered off course from his usual caring and live-and-let-die demeanor into a land of revenge plans. He is on a mission to destroy everything his father has worked for. What began as a goal of making the name Corinthos into something positive, has turned into a desperate attempt to ruin his dad. Will Michael take things too far for Willow to forgive him?

Sadly, the future is looking pretty grim for Michael and Willow. The excitement that came with the promise of growing their family came to such a rapid close with Willow’s cancer diagnosis. Since then, Michael has been consumed by his hatred for his father. As it turns out, revenge runs in the family. Sonny might not be Michael’s biological father, but being raised by him has taught Michael violence and vengeance are fair ways to settle the score. Willow will give Michael an ultimatum and make him choose: revenge on Sonny, or her. What will he choose? Visit us frequently for more spoilers and updates as Willow and Michael fall apart at the seams due to Michael’s plot against his dad.