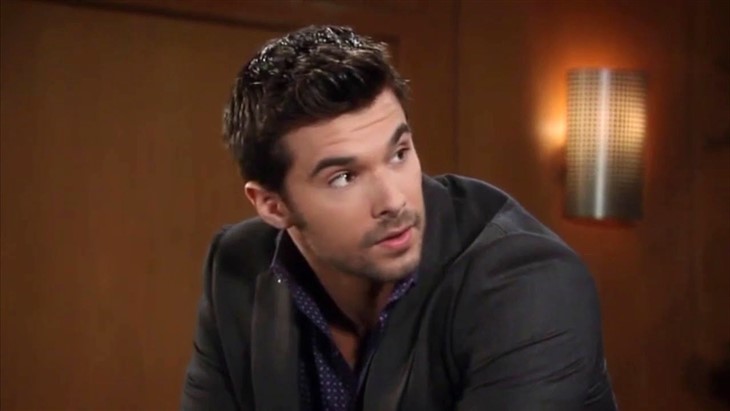 Chase is very angry with Brook Lynn Quartermaine (Amanda Setton) who now faces the consequences of her actions, not telling Chase she was supposed to write a letter. She has been deleting messages for weeks about writing a letter to the civilian review board regarding getting Chase reinstated as a detective with the Port Charles Police Department. She didn’t even consider Chase’s strong desire to go back to police work instead of her making him her star to sing her songs.

Chase confronts her with the fact that she took his chance to be a cop away from him. She also took away his right to decide things pertaining to himself and his own life.

GH Spoilers – A Man And His Clarinet

Marshall Ashford (Robert Gossett) looks at his newly restored clarinet that he hasn’t played for months since returning from New York. That was when his family brought him back and he’d tangled with muggers who destroyed it. It may have torn the clarinet to pieces but it brought his family together. He looks at the fully intact instrument and asks someone if they’re sneaking out. It might be Trina Robinson (Tabyana Ali) since she has something to confide in him.

Ava and Nikolas Cassadine (Maura West, Marcus Coloma) reconnect and catch up as she smiles and tells him one never knows what the day may bring. It sounds like they’re still playing getting divorced to fool his great uncle Victor Cassadine (Charles Shaughnessy) who just moved into Wyndemere Castle against Nikolas’ wishes. Nikolas is in a peculiar position now that the PCPD has drafted Ava to help find Esmé Prince, (Avery Kristen Pohl) even asking baiting Ryan Chamberlain (Jon Lindstrom) for his help.

If Nikolas gives up Esmé, he’ll give away the secret she’s carrying his child as well, and that might not be something Ava can forgive. But if he doesn’t, Ava could come into danger from Ryan, who’s not really locked-in.

Liesl makes an offer to Cody Bell, (Josh Kelly) which might be a very risky deal. She tells him if it’s money he wants, then money he’ll have. She can’t offer him what might be his $35,000 necklace because it was confiscated and now stolen. It sounds like Liesl is offering him $35,000 because the necklace may rightly have been his-if his birth father really had been Leopold Taub (Chip Lucia).

General Hospital Spoilers – Is Britt Westbourne In On It?

A fair question might be if Britt Westbourne (Kelly Thiebaud) is in on her mother’s offer to Cody, since she’s seen drinking a cocktail and saying another box checked off. On the other hand, perhaps since she knows she may have limited time to live her life the way she would want to, she’s made a bucket list. She might have checked another box off on her bucket list of things she wants to do before she’s no longer able.

Britt just found out she’s had Huntington’s Disease a lot longer than she originally thought. No one can blame her for getting a little wild and crazy while she still can.

At The Savoy, Selina Wu (Lydia Look) meets a new friend-Victor. She tells him they have much in common, as she addresses him as “Mr. Cassadine”. Victor smiles and seems quite taken with the mobster, perhaps they’re not as strange of bedfellows as it might seem. However, if Victor wants to keep his immunity deal Selina Wu might be someone he doesn’t want to be seen associating with. He’s in trouble the way it is with many who are onto him.

At the cabin where Holly took the Ice Princess necklace, which she removed from the briefcase and wore, there’s a standoff. Victor’s henchman couldn’t access the cabin to get the necklace because of Jordan Ashford, (Tanisha Harper) Mac and Robert Scorpio (John J. York, Tristan Rogers) and half the PCPD surrounding it. SWAT was also called in but as soon as they were going to go in, the cabin exploded and Holly ran out on fire-someone was seen grabbing the briefcase.

But Holly, fully involved doesn’t have it – and Mac tries to hold his brother back as Holly is on fire in the yard. She’s not stopping, dropping and rolling like she should know to do-did she go off the deep end, and more importantly, will she survive?