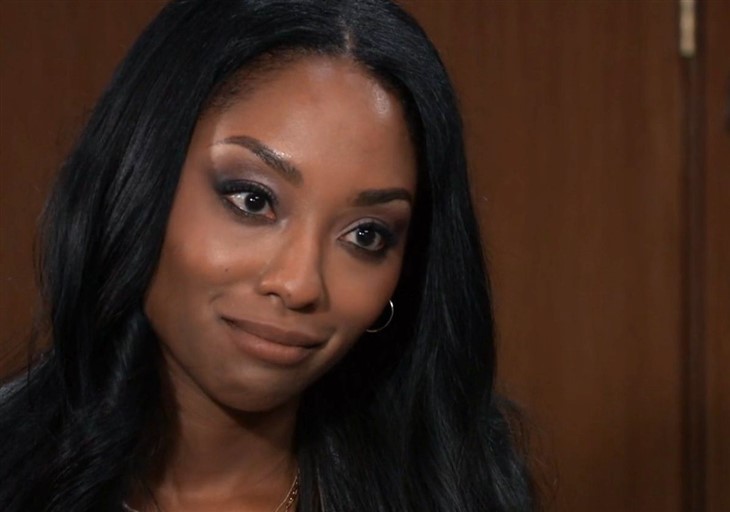 At the hospital, Jordan has arrived after the latest victim of the Port Charles Hook has been brought in, namely Diane Miller (Carolyn Hennesy). She talks to Dr. Portia Robinson (Brook Kerr) and although they are closely connected through family and friends, this may be an official visit. Jordan tells Portia to that end, she needs her help, and that may be urgent help regarding the latest attack by the Port Charles Hook.

Portia looks uneasy, and who can blame her; this is the third victim in less than two weeks. Hopefully, Diane will fare better than Brando Corbin (Johnny Wactor) who ultimately, they were not able to save.

GH Spoilers – Hanging Out With An Axe To Throw

Portia’s daughter, Trina Robinson (Tabyana Ali) is hanging out at the axe throwing place with Rory Cabrera, (Michael Blake Kruse) Josslyn Jacks (Eden McCoy) and Cameron Webber (William Lipton). Cameron will call Trina out, but it might be on something related to their axe throwing activities, which Josslyn suggests they make a friendly competition. Question is, is it couple against couple, or boys against girls, how will they team up? Maybe Cameron calls Trina out to be his teammate against Josslyn and Rory.

A tearful Sasha Gilmore, (Sofia Mattsson) Gladys Corbin, (Bonnie Burroughs) and Nina Reeves (Cynthia Watros) sit in the apartment shared by Sasha, Gladys and Brando. Gladys tells Sasha there is a step they can take if she’s ready; the funeral is already being planned by Maxie Jones (Kirsten Storms) so maybe Gladys wants Sasha’s okay. There’s also a possibility that a new guardian needs appointing for Sasha since Brando is not around.

Right now, all they can do is talk about it unless someone else has been appointed. Since Diane was attacked and could not ask for the continuance, they may just be seeing who Sasha will accept.

Carly is surprised to see Drew Cain (Cameron Mathison) show up in Jacksonville, Florida where her Aruba-bound plane had an emergency landing. She’s stayed around to fight for her mother’s grave and the cemetery it’s in to stay where it’s at instead of building a new parkway for the hoity toities. Carly asks Drew if he came all the way down there for her, and that answer will be in the affirmative. She’ll be glad for the help fighting the overly privileged and self-entitled Peyton Honeycutt (Linda Perl) and her Jacksonville Beautification gang. Fancy meeting a rich Port Charles Quartermaine hanging out with the poor little former trailer trash girl Caroline Benson; Peyton’s called Carly everything but that.

At GH, Curtis Ashford (Donnell Turner) sees Sonny Corinthos (Maurice Benard) and tells him he owes him for things that were done for his father, Marshall Ashford (Robert Gossett). Curtis must be referring for something that Brando did for his father in the past, unfortunately he’s no longer around to thank. Viewers can expect that maybe Curtis will want to help Sonny in his search for the monster that killed his cousin and attacked his longtime lawyer.

Curtis may no longer be in the private investigation business, but this may be different. Curtis will want to do everything he can to prevent any more attacks if he can.

Meanwhile, at the Port Charles Police Department, Sonny’s son, Dante demands answers from Dex Heller (Evan Hofer) who again was present following a hook attack. Dex was actually supposed to be guarding Diane but must have stepped away for some reason, and like Ava, he helped save Diane’s life – for the time being. Dex isn’t answering any questions without an attorney present, and right now there isn’t one for Sonny to hire for him.

Dante disagrees when Dex claims to have nothing to say. He tells him he bets he has plenty to tell him as they sit in the interrogation room at the PCPD.

Days of Our Lives Spoilers: The Desperate Search For Chad And Clyde