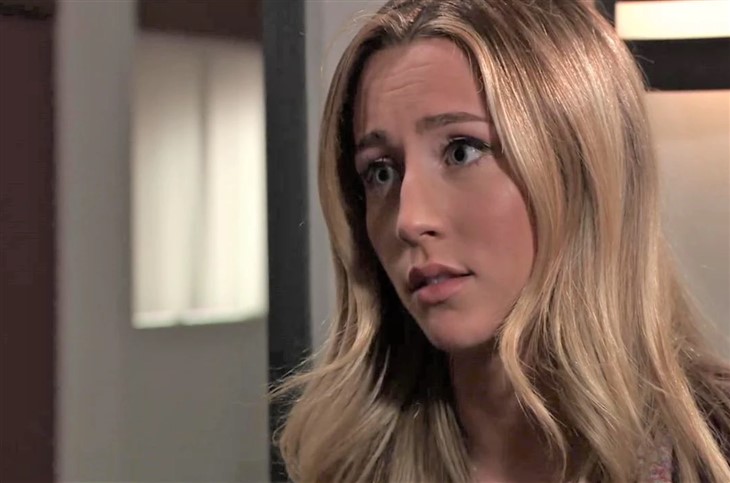 Josslyn runs into Dex Heller (Evan Hofer) and confronts him about his continuing to work for Sonny Corinthos (Maurice Benard). She eyeballs him and asks how long does he think it will be before Sonny betrays him? Josslyn grew up for the past several years with Sonny as a stepfather and she knows he cannot be trusted.

She, like Michael Corinthos, (Chad Duell) feel the betrayal Sonny caused when he chose Nina over his ex-wife, Carly Corinthos (Laura Wright). They will never trust Sonny again with anything he might do.

More confrontation happens at General Hospital, where Dr. Hamilton Finn (Michael Easton) tells Dr. Terry Randolph (Cassandra James) he knows why she and Elizabeth Baldwin (Rebecca Herbst) are going away. Terry and Elizabeth are going on a journey to Elizabeth’s past to find answers about her repressed traumatic memory which has been coming up bit by bit. Elizabeth needs to fill in the blanks, and know if Reiko Finn (Mele Ihara) survived her fall down the stairs; if she or her father Jeff Webber (William Moses) pushed her. Most of all she needs to find out if Finn knew her or her parents and hasn’t given a clue of previous recognition.

Cameron Webber (William Lipton) is worried about his mom’s trip away with Terry, telling her she can’t go there. But Liz knows that “going there” is the only way she will find answers to her troubling questions and be able to fill in the blanks of her traumatic memory. She probably hopes that her and Terry’s journey will do all of that without contacting her parents for answers.

However, she may have no choice but to contact her father, and mother Carolyn Webber (Denise Crosby) to find out the answers. Liz tries to reassure her son that everything will be all right.

Nina is curious about Ava Cassadine’s (Maura West) intentions, and asks her how long is this situation going to last? She obviously is talking about the situation between Ava and Nikolas, wanting to know is she going to divorce the Cassadine or not. Ava has seemed to waver between moving on and staying with Nikolas, in spite of the egregious things he has done. It’s going to be messy in any case, since they destroyed both their prenup and their postnup, and Scott Baldwin (Kin Shriner) will have to do a lot of backtracking.

Ava is not the only Cassadine with a conflict as Nikolas confronts his great-uncle Victor Cassadine (Charles Shaughnessy). Victor makes a revelation as Nikolas tells him that the Cassadine legacy is in HIS hands. Now, the legacy he’s referring to might be the baby that Esmé Prince (Avery Kristen Pohl) is carrying, since he’s going to need some help from Victor for that situation.

But now the problem of keeping Esmé’s presumed death a secret isn’t needed. Nikolas just needs a medical facility to provide her discreet maternity care and the north tower of Wyndemere Castle isn’t it.

GH Spoilers – A Discovery Made

Meanwhile, Cody Bell (Josh Kelly) and Britt Westbourne (Kelly Thiebaud) have embarked on a journey of their own, to find Peter August’s (Wes Ramsey) lockbox. They found a key in the box of his belongings that he left to her, and it looks like they’ve located the lockbox is and are ready to open it. Britt has a look that is halfway between excitement and fear as she tells Cody “here goes nothing!” They will make a discovery that will prompt her to ask a favor of Sam McCall (Kelly Monaco) and him talk to Dante Falconeri (Dominic Zamprogna).

Days of Our Lives Spoilers: Paulina Is Ready To Fight Back