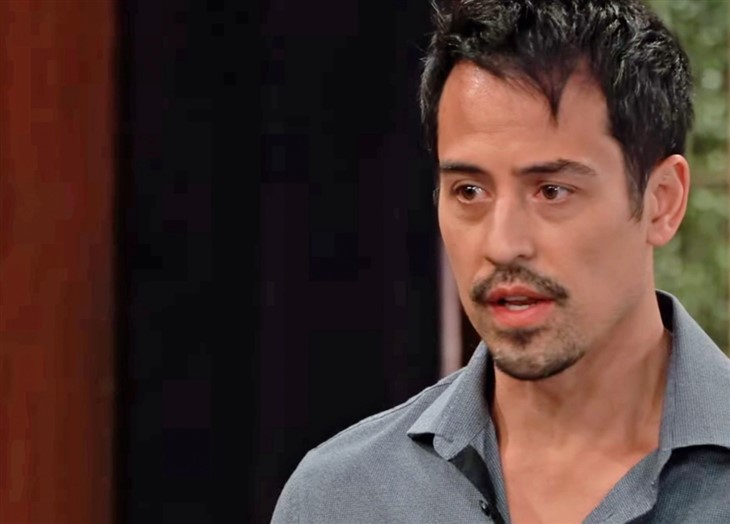 General Hospital spoilers and updates tease there could be twin trouble for baby daddy Nikolas Cassadine (Marcus Coloma). Esmé Prince (Avery Kristen Pohl) is three months along and has an awful big baby bump-could she be carrying twins?

General Hospital Spoilers – A Flutter And A Timeframe

We know Esmé is three months along because when she flopped down on the bed and screamed, she felt butterflies; a sign of her baby or babies’ first movement. She also complained to Nikolas, asking him if he was going to keep her prisoner in that room for the next six months, in the conversation about the baby. But she does look bigger than usual for a three month pregnancy, plus her father is a twin; the father carries the gene which can pass down to the daughter.

Usually non-identical, or fraternal, twins are genetic but remember we are talking about a fictional soap opera here! But one has to admit, General Hospital has more sets of twins than any other soap opera, so Esmé having twins would not be a shock.

According to General Hospital spoilers, Nikolas should know better than to not have a discreet OB-GYN that he can call to make sure Esmé and her baby or babies are okay. Not everything can be done inside the castle, such as ultrasounds, but if he pays the right price anything could be possible; he has a son and a pregnant woman there. Even if he wasn’t around and involved in Courtney Matthews’ (Alicia Leigh Willis) whole pregnancy, Britt Westbourne (Kelly Thiebaud) lived with him when she was pregnant.

Courtney, of course was Spencer Cassadine’s (Nicholas Chavez) mother who died when he was born, Britt was Lulu Spencer’s (Emme Rylan) surrogate with Rocco Falconeri (Finn Francis Carr). Britt would probably not be the best choice, since she undoubtedly would have a problem with Nikolas holding his son’s ex captive and carrying Nikolas’ babies.

Esmé does indeed look big enough to be carrying twins, but one must also consider how slender she is; some women carry bigger than others. But Nikolas still needs to get her proper pregnancy care, because even if she’s not carrying twins, the baby may be a big one and she could need a c-section. Great uncle Victor Cassadine (Charles Shaughnessy) undoubtedly could get her taken care of in one of his medical compounds, but right now he’s too busy covering up his other plots.

But the first medical test Nikolas needs to get Esmé on board with is a paternity test; even though he seems to be claiming this baby Cassadine as his own. If nothing else, he could pull o ,ne of her hairs or take her unfinished glass of milk to get her DNA like Carly Corinthos (Laura Wright) did.