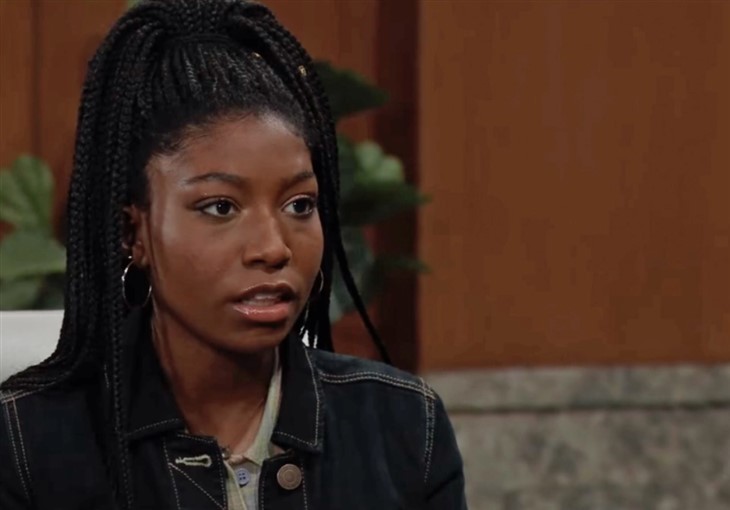 General Hospital (GH) spoilers and updates tease in this week’s Soap Opera Digest that Trina Robinson (Tabyana Ali) will receive a life changing verdict with dramatic fireworks. What will be her fate? This verdict will have long term consequences and lives will not only be changed, but ultimately, some will be lost.

General Hospital Spoilers – She Knows She’s Done All She Could

Trina knows that she’s done all she could to show her true character to the jury when she took the stand in her own defense. She refrained from shifting any blame to Esmé Prince (Avery Kristen Pohl) even though she knew she was framed, Attorney Diane Miller (Carolyn Hennesy) doing her best to prove reasonable doubt. Trina had been assured by Diane as well as her family and friends that would be all it would take to keep her out of prison; but she’s still nervous.

The only person who could truly exonerate her is in a coma and even if Oz Haggerty (Max Faugno) wakes up, will he testify that he sold Esmé the phone? Spencer Cassadine (Nicholas Chavez) came through for her at the last minute with his alibi, but it was discredited by Assistant District Attorney Jennifer Arden (Jennifer Field).

Trina knew that Spencer was taking a big risk with his own freedom by taking the stand to be her alibi at the last minute. But he may have done so for no reason; ADA Arden pointed out that she could have set the phone to record and upload the revenge porn ahead of time.  In the meantime, he had wrestled with his truth, namely, his true feelings for Trina and whether to reveal them to her, but thought better of it. Spencer had already hurt Trina by keeping those feelings secret and revealing them then may have done worse harm, especially if she was found guilty and sentenced. However, unbeknownst to him, his coming forward did make an impact on Trina and as a result, she has questions about his true feelings for her.

Trina’s family takes a risk as Curtis and TJ Ashford (Donnell Turner, Tajh Bellow) and her mother, Dr. Portia Robinson (Brook Kerr) discuss a plan. TJ later tells Trina that Oz’s medical team was trying to bring him out of his coma, but it may not happen quickly enough.  Trina’s good friend and potential boyfriend, Officer Rory Cabrera (Michael Blake Kruse) has been tasked with standing guard outside Oz’s room and no unauthorized personnel are allowed in.

That includes unauthorized medical personnel – meaning TJ and Portia, although a conscience stricken Port Charles Police Commissioner Jordan Ashford (Tanisha Harper) creates a diversion, allowing Portia inside. Viewers will remember Jordan believes Trina was framed by Esmé but because of the phone she planted in Trina’s purse, had to arrest her.

GH Spoilers – The Call Comes In And Lives Will Change

As Portia gives Oz the medications to reverse his medically induced coma, Trina waits outside talking to TJ as she receives a call informing her that the verdict has come in. In the meantime, even if Oz does recover from his coma and is able to exonerate her, it’s too late, unless he does so upon appeal of the verdict. But the appeal could take several months or possibly even years, depending on how booked the court calendar is, and ADA Arden will fight to block any appeal tactic. Then there is another problem – Esmé has disappeared after a fight with Ava Cassadine (Maura West) in which she fell off the parapet into the ocean below. But Ava will continue to fight for Trina’s freedom, possibly at the expense of her own, and other lives may ultimately be lost as well as be drastically changed.

Be sure to catch up on everything happening with GH right now. Come back here often for General Hospital spoilers, news, and updates.\