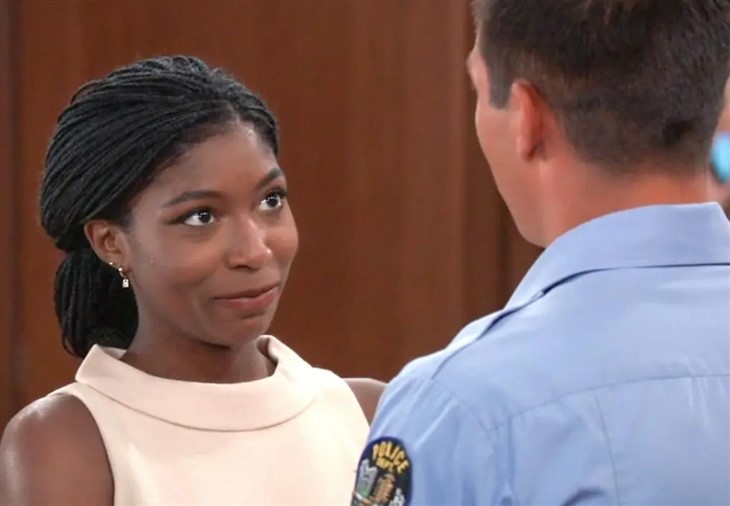 General Hospital spoilers tease that Trina Robinson (Tabyana Ali) has been considering going on a weekend getaway with her new boyfriend Rory Cabrera (Michael Kruse). Trina was recently exonerated of recording her good friends Josslyn Jacks (Eden McCoy) and Cameron Webber (William Lipton) having sex and then posting the recording to the internet. Trina was framed by Esme Prince (Avery Kristen Pohl) and was arrested and tried. Fortunately, enough evidence was found to exonerate Trina at the last minute and all charges were dropped.

The Hook killer has been systematically attacking members of Trina’s support system. Although Brando Corbin (Johnny Wactor) isn’t connected to Trina, he most likely was not the Hook’s intended victim. Josslyn was also in the alley where Brando was killed and was most likely who the Hook wanted dead. Rory could actually be another possible victim since the killer has been identified as a woman. A weekend getaway could prove to be quite dangerous. Another possibility is that Rory is working with the Hook to eliminate everyone who might keep Trina from him. If so, Trina could be in for quite a nightmare.

GH Spoilers – Rory Cabrera And Trina Robinson Will Be Isolated And In Danger!

If the Hook does follow Rory and Trina on their out-of-town trip, they could find themselves isolated and in grave danger. Rory is a police officer and can defend himself under most circumstances, but perhaps the Hook ambushes him in a sneak attack. That would leave Trina alone to face the serial killer all by herself. Perhaps Rory survives the Hook’s initial attack and can help Trina survive.

Another possibility is that Spencer Cassadine (Nicholas Chavez) will be released from prison right as Trina and Rory plan their getaway out of town. Spencer could receive word that Trina was in danger and races to her aid. But will he make it in time? Or will Trina have already found a way to take down the killer herself? If Spencer does rescue her, this could finally be the beginning of their love story. It seems likely that even if Rory survives, Trina will realize her heart belongs to Spencer.

G Spoilers – What Do You Think?

Will the Hook attack Rory and Trina on their weekend getaway? Will either of them survive? Or will Spencer come to the rescue? Anything can happen in Port Charles so stay tuned to General Hospital airing weekdays on ABC. And don’t forget to check back right here regularly for all your General Hospital news, information, and spoilers!