GH Spoilers: Could Laura’s Assistant, Eileen Ashby Be The Hook? 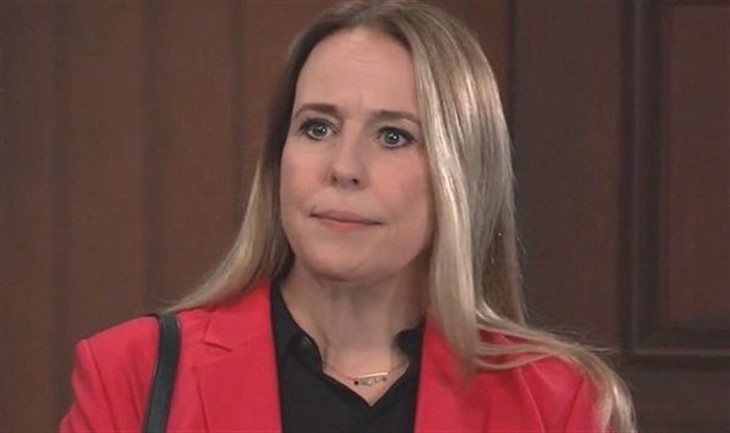 General Hospital spoilers and rumors tease that there could be another woman in the running as a suspect for “The Port Charles Hook”. Even though recent scenes lead people to believe it’s Esmé Prince, (Avery Kristen Pohl) that could be misleading, and it could be someone else.

Viewers will remember that Mayor Laura Collins (Genie Francis) has been out of the country for several months now. It seems strange that her deputy mayor Eileen Ashby (Heather Mazur) hasn’t been seen lately, even at Trina Robinson’s (Tabyana Ali) trial. Eileen has been a spy in Laura’s office, reporting back to Victor Cassadine (Charles Shaughnessy) but she hasn’t been around; perhaps Laura fired her.

Perhaps she didn’t live up to Victor’s standards either and he fired her too; although usually he’d just have made her disappear; but she is fond of bangle bracelets. Either way, she could have become either an extremely disgruntled employee gone postal, wanting to make Port Charles inhabitable or maybe she’s just gone psycho.

Eileen is about Diane Miller’s (Carolyn Hennesy) size, and Brando Corbin, (Johnny Wactor) who was the first fatality heard something jingling. So did Diane, before she was attacked; Ava Cassadine (Maura West) was attacked from behind and heard nothing, but she was the first victim and it seemed a crime of opportunity. Perhaps the attacker didn’t have her bracelets on that day, because she was outside at a picnic – and grabbed the gaffing hook off the wall of the Quartermaine boathouse.

Besides, thick suede gloves, which the attacker grabbed one of before going after Ava with the gaffing hook, don’t go well with bracelets, and there is a possibility of a copycat. Victor was suspected as well as Nikolas Cassadine (Marcus Coloma) in Ava’s attack, but were cleared so maybe he’s having Eileen make sure they stay cleared.

Perhaps Victor has tasked Eileen with both throwing law enforcement off the track, with Victor making the first strike at Ava himself, plus trying to solve the problem of Esmé’s disappearance. If he has tasked her with going after everyone that Esmé would have wanted to kill, having people think she’s Esmé serves his purpose. He will soon find out Esmé did survive, but in the meantime, he’s making sure that Eileen goes after Esmé’s enemies.

Victor could also send her after Esmé herself when he learns of her survival, ensuring no one goes down for her murder. As for Eileen, he’ll make sure Esmé’s remains will never be found, and then he’ll make Eileen disappear too.

The Young and the Restless Weekly Spoilers: Nate’s In Trouble, Ashley Turns Down Tucker