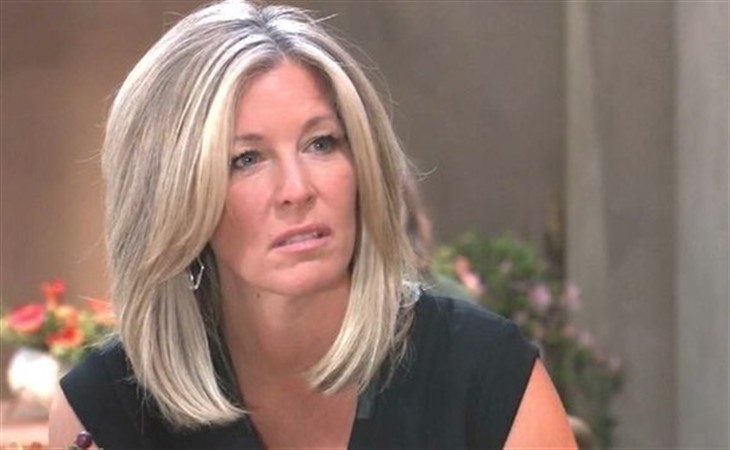 In Carly’s kitchen, she’s sitting down having coffee with her mother, Bobbie Spencer (Jacklyn Zeman) and has a question. She can tell there’s something on Bobbie’s mind and tells her, if she wants to say something, she should just say it. Previously, Carly had put the brakes on her and Drew Cain’s (Cameron Mathison) burgeoning relationship, citing the need to know who she was without a man in her life.

Perhaps it is Bobbie who inspires Carly to rethink her decision and give this new chance at true love a try. After all, there’s only one chance in some things in life, and perhaps she shouldn’t let this one slip away.

At the Savoy, Curtis Ashford (Donnell Turner) has some questions for his buddy Drew Cain (Cameron Mathison) who’s stopped by for a visit. Curtis asks Drew as he sits at the bar what the real reason is that he stopped by. Drew will open up to Curtis about his stalled romance and confusing feelings regarding Carly, who doesn’t seem to know what or who she wants. Drew told Carly that he thought her reasons for putting on the brakes, namely finding who she was, was a load of crap. Drew isn’t sure how to figure out this puzzle named Carly, and he’s coming to his old buddy to help him figure it out.

Jordan is back with more questions for Elizabeth Baldwin (Rebecca Herbst) who was coming across as evasive concerning her whereabouts when Ava Cassadine (Maura West) was attacked. Elizabeth honestly couldn’t remember what she was doing or where she was, other than coming out of the woods and running into Nikolas Cassadine (Marcus Coloma). She had a gash on her forehead and appeared to be having pain in her hand and wrist and was frightened, having lost more time.

Jordan is stern as she confronts Liz in an attempt to get at the truth; she tells her now it’s her turn to answer questions. Elizabeth still looks frightened and confused.

GH Spoilers – A Confession Made

It looks like Elizabeth is still in Hamilton Finn’s (Michael Easton) office at General Hospital and in response to Jordan’s confrontation has a confession for Finn. She is frightened and looks a bit shaky as she admits that she hadn’t told him everything. Viewers can expect she will likely admit the same things to Finn as she had to Nikolas, about her having lost time and having a memory that makes no sense. She keeps remembering a confrontation with a woman at the top of the staircase, and her telling her to stay away from her father.

Victor and Spencer Cassadine (Nicholas Chavez) are also still at the hospital talking about Ava who is now in a room in the intensive care unit. Victor tells Spencer about his stepmother that she’s going to learn the hard way what it means to cross a Cassadine. Meanwhile, Trina is still in the room with Ava, who is hooked up to intravenous tubes and a heart monitor.

Victor may have already done something to teach Ava a lesson, but it’s not for sure as he wasn’t shown in the room. Only Nikolas Cassadine (Marcus Coloma) and Trina have been in Ava’s room to visit her other than GH staff.

Valentin Cassadine (James Patrick Stuart) is talking to Anna Devane, (Finola Hughes) continuing a conversation about being honest with each other. Anna had deduced when talking with Victor about Valentin and how he’d changed since rehabilitation that Charlotte Cassadine (Amelie McClain) may be in trouble. She knows that Valentin’s daughter would not choose to stay abroad over the summer over an equestrian program and was making calls to see who put it in place. Valentin now seems to be confirming that he has one very good reason, and the truth about Victor’s blackmail with Charlotte as the pawn appears to be coming out.

As Victor and Spencer remain talking about Ava outside of her hospital room in the GH intensive care unit, Trina runs out with a plea for help. Ava had flatlined while she was in her room visiting her and apparently the nurses’ station is not responding or shorthanded. An ICU without a call button seems strange as well, but Trina is obviously panicked.

Trina rushes out and begs Victor and Spencer to help Ava, and viewers can expect of the two, Spencer will play the hero. Will help reach Ava in time to save her life, or was her flatlining the result of Victor’s machinations?

Days Of Our Lives Spoilers: Orpheus Makes His Next Dangerous Move