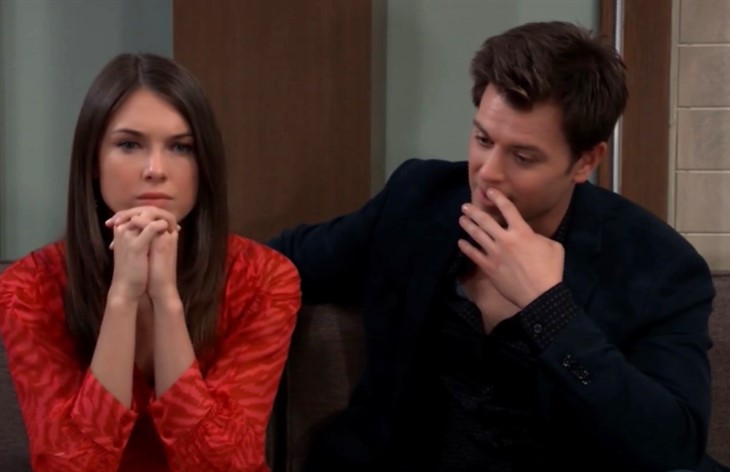 General Hospital (GH) spoilers and updates for Thursday, May 12 tease there will be surprises, surprises, and shocks on Thursday’s episode of GH!

General Hospital Spoilers – You Honestly Think Cutting Him Out Of Your Life Doesn’t Hurt?

At the Quartermaine guesthouse, where Michael Corinthos (Chad Duell) and Willow Tait (Katelyn MacMullen) live with his son Wiley Corinthos (Viron Weaver) Willow has a question for Michael! She appears to be talking about the obvious dysfunction between Michael and Sonny Corinthos (Maurice Benard) after encountering him at the Port Charles Cemetery. They had come to visit Jonah Corinthos’ aka Wiley Cooper-Jones (Grace Elizabeth Davis) grave and Nina Reeves (Cynthia Watros) was there visiting Nelle Benson’s (Chloe Lanier) grave.

Sonny had arrived as Willow and Nina argued, pledging to have Michael’s back in court, but Michael had cut Sonny out of his life already. Willow asks Michael if he honestly thinks cutting him out of his life doesn’t hurt?

Laura Collins (Genie Francis) runs into Dr. Hamilton Finn (Michael Easton) at GH, apparently following up on Nikolas Cassadine’s (Marcus Coloma) hand injury caused by Sonny. The two of them begin talking about Elizabeth Baldwin’s (Rebecca Herbst) stalking situation after Martin Grey (Michael E. Knight) told Laura that Lucy Coe (Lynn Herring) had referred her medium. Finn has deep concerns about Elizabeth and the whole situation, and talks to Laura more in depth about what is going on. Laura tells Finn that she thinks he’s right to wonder about Elizabeth and what is really going on there!

Meanwhile, back at the Baldwin house, Elizabeth is in the middle of her séance with the medium, Chelsea Lam (Jen Ray) who looks scared! Chelsea had felt a dark presence in the house and had given Elizabeth some details from the ghost, or possibly poltergeist (an undead spirit not at rest. The details led Elizabeth to believe that it could be Franco Baldwin (Roger Howarth) trying to tell her he’s not happy with her moving on with Finn

Elizabeth is almost in tears, and extremely frantic, as she pleads with Chelsea to tell “Franco” that she’s ready to listen! If this is a poltergeist or a ghost, Chelsea’s details certainly could have fit Franco, but they could have fit someone else as well – long ago murders were committed there!

Esme Prince (Avery Kristen Pohl) was visibly worried when Spencer Cassadine (Nicholas Chavez) confronted her with the letters, one of which he read, from Maggie Fitzgerald (uncast character). Spencer had been snooping in her room for evidence to clear Trina Robinson (Tabyana Ali) of the charges that Esme framed her for and Esme caught him! He’d found her secret box of letters, one of which spoke about it not being a good idea to have anything to do with her birth father. Esme tells Ryan about this at Spring Ridge and Ryan is not happy – he wants to know how badly she screwed up!

General Hospital Spoilers – Why Didn’t You Just Slam The Door In My Face?

At Nina’s apartment, she has a visitor, perhaps one she wasn’t expecting! She smiles at the person which may be Sonny – at the cemetery, she’d told him maybe they should back it off for a while. Sonny is in an awkward situation being involved with Nina while this court challenge is getting ready to be heard. She doesn’t like being a wedge between him and Michael and Willow, but it could be someone else since it was her that seemingly slammed the door in his face! She laughingly asks the person why they didn’t just slam the door in her face!

GH Spoilers – I’d Like To Say This Is My Fault, But It’s All On Her!

Back to the Quartermaine gatehouse, it sounds like an embarrassed Drew Cain (Cameron Mathison) is trying to apologize to Michael and Willow! They walked in on him and Carly Corinthos (Laura Wright) in the gatehouse, where Carly was trying to get a DNA sample of Willow’s to compare to the one of Nina’s! Drew caught Carly stealing a wine glass Nina had drank from and put it in her purse! He says I’d like to say this is my fault but it’s all on her!

The Queen’s Platinum Jubilee Service At St. Paul’s Cathedral – All the Details

Days of Our Lives Spoilers: Can Gwen Be Redeemed?