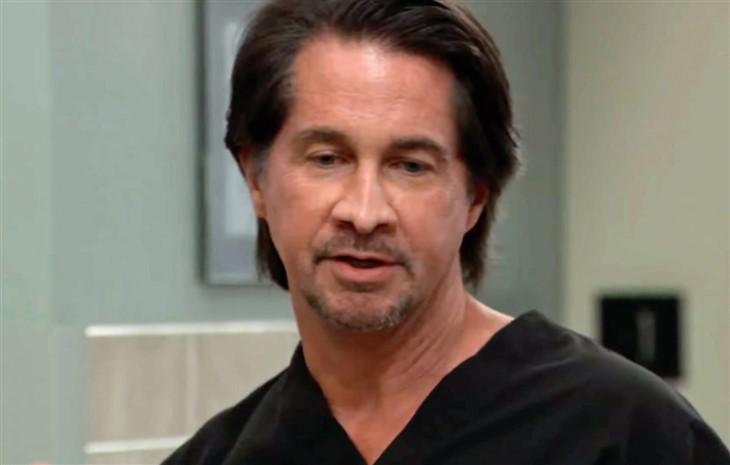 In an office at GH, Finn pleads with Elizabeth Baldwin (Rebecca Herbst) for a second chance. Elizabeth asks him if he’s willing to do this again, and he seems very serious. He’s bound to have some questions about the prenatal vitamins he saw at Wyndemere, seeing Elizabeth has a bottle of the same kind.

It likely won’t be long that he puts two and two together and realizes she’s caring for a pregnant woman at Wyndemere, and it’s likely Esmé Prince (Avery Kristen Pohl). He just came from questioning Nikolas about Esmé and why she was on the pier when Elizabeth was, when Elizabeth was attacked.

GH Spoilers – Is It A Date?

Meanwhile, Officer Rory Cabrera (Michael Blake Kruse) is with Trina Robinson (Tabyana Ali) and he asks her again if she’d like to come with him. He mentioned at Rice Plaza that it was their three month anniversary of being together officially previously, with Trina torn between him and Spencer Cassadine (Nicholas Chavez). At least she was when she was with him for a weekend at Comic Con, every time he got near her she’d think of Spencer. She will need to soon make up her mind, whether she wants to be with Rory or with Spencer, since Victor Cassadine (Charles Shaughnessy) got Spencer out of Pentonville early.

Meanwhile, Nikolas is having all kinds of problems and has to resort to stalling tactics since he’s got Esmé captive in the North Tower. First he tried stalling Victor from moving in and now he’s telling Spencer he can’t stay there. That won’t sit well with either Victor or Spencer, even if Nikolas is put on the spot, and Spencer might have to turn to his Spencer side.

Nikolas and Cyrus Renault (Jeff Kober) were fighting for squatter’s rights in their mutual great-nephew’s life. If Spencer can’t stay with the Cassadines at Wyndemere he’ll have to stay with his grandma Laura Collins (Genie Francis), and Victor won’t like that at all.

In Ireland, at the Donnely house, Valentin Cassadine (James Patrick Stuart) was getting ready to rush Anna Devane (Finola Hughes) to safety when someone showed up at the door. After hearing Agent Whitten (Mike Peebler) had a lead on Anna’s location from Felicia Scorpio (Kristina Wagner) Valentin and Anna were alarmed. It’s obviously someone they know, and Martin Grey (Michael E. Knight) will create a diversion; he and Valentin were going to look for Lucy Coe (Lynn Herring) together. The big question is who’s at the door, could it be Martin, or maybe Lucy, as Valentin asks how he or she found them.

Ryan actually thought the same thing when Esmé visited him the last time and was not happy at hearing “his” Ava had been attacked. Esmé had denied it to her birth father, however.

At Wyndemere, Spencer is obviously speaking back about his father and Victor’s situation there. Spencer speculates that maybe her silence says it all, and it sounds like he’s referring to Esmé. He has likely heard through Cyrus that Esmé is a suspect for the Hook killings, and if she wasn’t pregnant Nikolas would have turned her in. As far as where Spencer will stay, Victor will probably intervene and force Nikolas to open up an area for Spencer.

Elsewhere, Sonny has a serious talk with someone, and it could be Dex Heller (Evan Hofer), and Sonny will also issue a threat. He tells someone that he’d appreciate it if they talk to him first, although he doesn’t seem too riled up. He may be talking to Carly Spencer (Laura Wright) as well, having found out from Josslyn Jacks (Eden McCoy) that she took care of Dex in her dorm room.

Sonny by now may have figured out that Carly had talked to Brick (Stephen A. Smith) for help with getting antibiotics for Dex. Now the pieces of the puzzle are starting to come together of what happened.

Days of Our Lives Spoilers: Eric And Nicole Have It Out Once Again