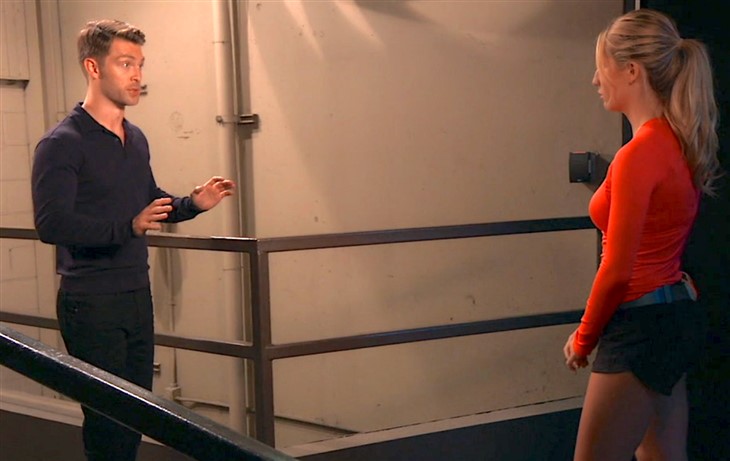 General Hospital (GH) spoilers reveal a new direction for Josslyn Jacks and that new direction sends her straight into the dumpster.

But there is no doubt that Josslyn feels a pull towards Dex Heller (Evan Hofer), the new guy working for Sonny Corinthos (Maurice Benard), who is actually undercover working for Michael Corinthos (Chad Duell). Joss doesn’t know the second part. She just knows that Dex is the man who came through and saved Ava Jerome’s (Maura West) life when Joss was having a panic attack and didn’t know what to do.

Joss’ attraction to Dex becomes more apparent this week when the pair go dumpster diving to find Avery Corinthos’ (Ava and Grace Scarola) charm bracelet, something Josslyn won’t let her little sister live without, knowing how much is means to her.

“This is the first time they’ve really had, like, pure one-on-one time, when they’re not in a group or getting interrupted by someone. They end up having a moment of real physical closeness that they didn’t previously share, and the dialogue in that scene is really personal, as well,” Eden McCoy said in the September 12, 2012, issue of Soap Opera Digest. “He talks about his family and it’s her first experience of him being vulnerable.”

But what about Cam and her big relationship? “She’s in total denial,” McCoy said. “Like she knows but it’s not something she wants to speak into existence, perhaps because it’s uncomfortably powerful for her right now.”

It’s clear that Dex feels a pull towards Joss, as well, and that might get in the way of his mission for Michael. Could even more danger be on the way for a new young star-crossed pair? Stay tuned to General Hospital weekdays to see how this story plays out.

Growing Up Chrisley: Is Savannah Dating An Old Friend?