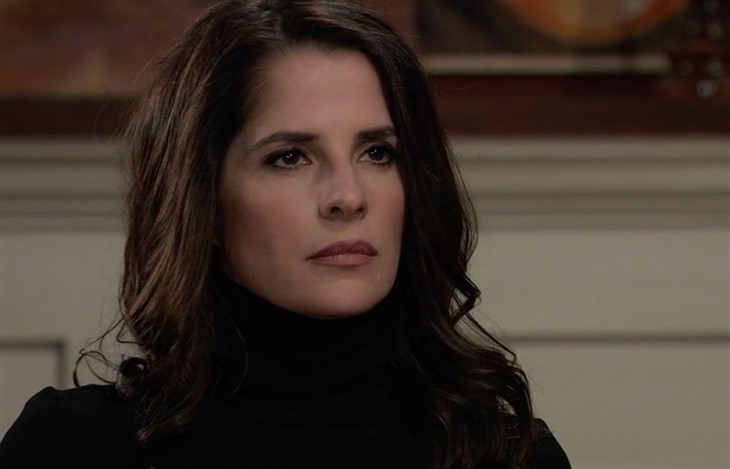 General Hospital Spoilers tease that Carly Corinthos (Laura Wright) is at a low point in her life. She just discovered that her husband, Sonny Corinthos (Maurice Bernard) was in love with Nina Reeves (Cynthia Watros) during the time Sonny had amnesia and living in Nixon Falls under the name “Mike”. Normally, she would be able to turn to Jason Morgan (Steve Burton), her best friend who she also is in love with, but Jason recently died in Greece. Feeling she has no one to turn to, she goes to Jason’s favorite spot: the footbridge. But she isn’t alone there, Drew Cain (Cameron Mathison) is there too!

Drew, Jason’s twin brother, was in Greece under the control of Peter August (Wes Ramsey). A part of Drew blames himself for Jason’s death, although Jason was certainly there of his own free will. But the truth is that Drew got to come home, and Jason didn’t. That weighs heavily on Drew’s mind. So when he encounters Carly at the footbridge, look for them to connect in ways that they might not have under any other circumstances. But the more Drew is there for Carly, the more Sam McCall (Kelly Monaco) will get concerned.

Sam, who has been involved with both Drew and Jason, knows all too well the hold Carly had on Jason. Jason couldn’t really have a successful relationship with another woman, because Carly always came first. Carly may subconsciously be trying to fill the void that Jason left, but Sam will worry that Drew will get caught up the same way that Jason did. Look for Sam to warn Drew that Carly may begin to depend on him a bit too much.

But Drew may be just as drawn to Carly as she is to him. Drew isn’t Jason, but if he can help honor his brother’s memory by comforting those he cared about, especially Carly, Drew may feel that it’s his responsibility. And Sam is with Dante Falconeri (Dominic Zomprogna) now, so she has no say in who Drew spends time with. This will frustrate Sam, who isn’t interested in a romance with Drew at this time. But she won’t want to see Drew become Carly’s sole world because that won’t end well for anyone.

Will Carly replace Jason with Drew in her mind. Will she become as dependent on Drew as she was with Jason? Is Sam right to warn Drew, or should she mind her own business? Anything can happen in Port Charles so stay tuned to General Hospital airing weekdays on ABC. And don’t forget to check back right here regularly for all your General Hospital news, information and spoilers!