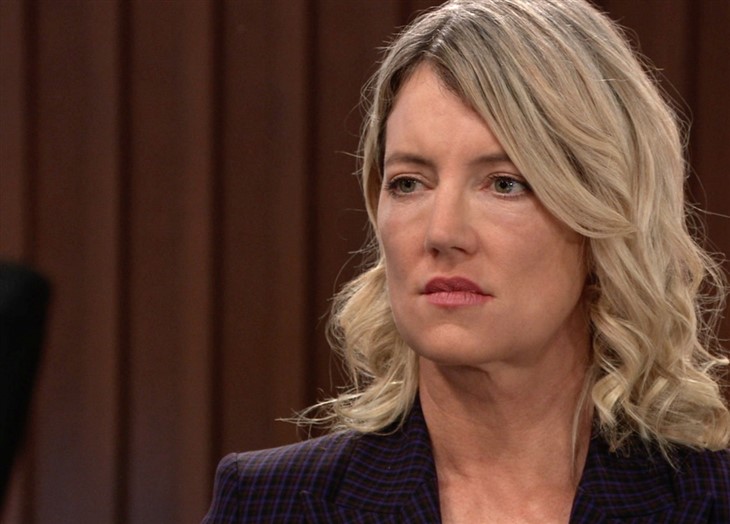 General Hospital (GH) spoilers reveal that the week of May 23 will focus on Nina Reeves’ (Cynthia Watros) fight for visitation rights. It is teased that Nina will go missing after the judge’s decision is announced. Sonny Corinthos (Maurice Benard) could go on a frantic search for Nina. However, does she leave on her own, or is someone else responsible?

GH spoilers reveal that Nina decided to go to court to get visitation with Wiley Quartermaine-Corinthos (Viron Weaver). During the week of May 23, Nina’s legal battle with Michael Corinthos (Chad Duell) and Willow Tait (Katelyn MacMullen) will get intense. Sonny has been put right in the middle of the court battle.

It is teased that Sonny will ignore Dante Falconeri’s (Dominic Zamprogna) warning. It appears that Sonny is going to fully support Nina, which includes testifying on her behalf. Of course, this will only make the dynamic between Sonny, Michael, and Carly Corinthos (Laura Wright) even worse.

Even though Nina might have a fighting chance in the beginning, it sounds as if things will go in the other direction as time goes on. During the week of May 30, Michael will talk about the judge’s decision with Carly and Willow. It doesn’t sound like the discussion is explosive but calm. So, that’s a clue that Nina might lose the case.

General Hospital spoilers reveal that after the judge announces the decision, Nina will go missing. Nina was so determined to win and really thought she had a chance. Plus, Carly will definitely rub this in Nina’s face.

Nina’s disappearance could be her going away on her own. Nina might want to take time to lick her wounds and regroup. After all, the last thing Nina wants is for Carly, Michael, and Willow to see how defeated she is over the ruling.

However, Sonny will be worried about Nina. Sonny could go on a frantic search when he can’t reach Nina.

There is also the possibility that Carly’s secret about Nina and Willow’s connection could get out. Carly and Michael won’t want Nina having any reason to get closer to Wiley or Willow. There is a chance that Michael and Carly could resort to extreme measures to get rid of Nina. In their mind, it’s to protect Wiley and Willow.

Whether Carly and Michael get rid of Nina, or she goes away on her own, Sonny will look for her. Of course, it wouldn’t be a soap without danger. So, when Sonny finds Nina, he could discover she’s in terrible danger. Or maybe it’s the other way around. What if Sonny ends up in a deadly situation, and Nina saves him? In any case, expect a lot of twists and turns in this storyline.