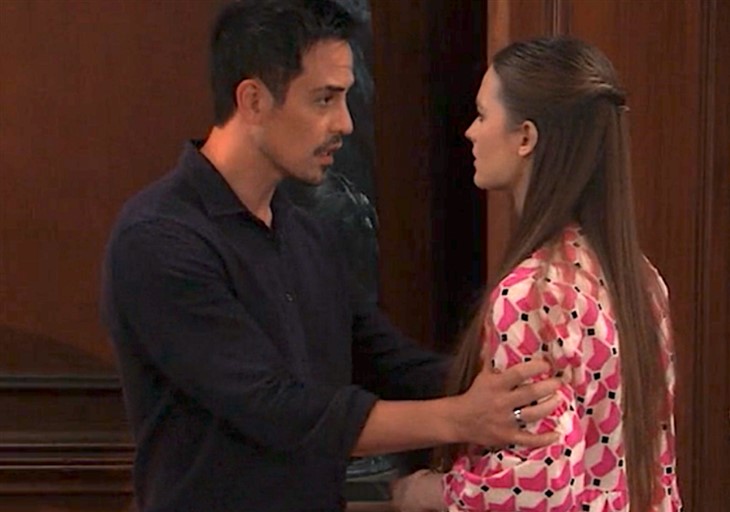 General Hospital (GH) spoilers tease that fans are revolting against the putrid idea that Esme Prince (Avery Pohl) will have the spawn of Prince Nikolas Cassadine (Marcus Coloma). After Nikolas went at it like alley cats, then Nik went in for another go round, fans are passing the puke bags.

Social media reaction shows that roughly 99.9999999% of fans are totes against this ghastly pairing. What could be worse than a middle aged man using a teen for revenge sex? How about a middle aged father using his son’s girlfriend for said fling? Ick, ew, there just are not enough words to describe the sketchiness of this savage coupling.

And yet there is Port Charles precedent and some even say karma is at play. But what about when Esme says she’s pregnant and you know she will? What then, riddle me that Casey the Alien.

At least Casey the Alien was real. Whatever. This unholy pairing of teen Esme and grown a** adult Nikolas is wretched and fans are leaving comments left and right about burned retinas and lost lunches. If ever Rosemary’s baby was to have a twin now is the time.

But before we get too carried away, let’s not forget that Nikolas’ wife Ava Jerome (Maura West) did the exact same thing with her daughter’s boyfriend Morgan Corinthos (Bryan Craig). For a time she even thought she was pregnant by him. So, pot, meet kettle as far as Nava are concerned.

GH spoilers – Why Esme Prince Had A Pregnancy Scare

For fans who say the show would not got there with an Esme and Nik pregnancy, then why the whole pregnancy scare with Spencer Cassadine (Nicholas Chavez)? Against the backdrop of Nesme, it all makes sense. Esme was not pregnant then, but since then she and Nikolas have not had sex. There is no way the potential baby could be Spencer’s, it would have to be Nikolas’.

At the very least, Esme can claim to be pregnant even if she isn’t and Nikolas will have to acknowledge that he seriously betrayed his son once again. First he let Spencer believe he was dead, now he beds his girlfriend? There is no going back from this.

Tell us what you think GH fans, is this a case of turnabout is fair play for Nava or a seriously demented coupling that should have never happened?

Jill Duggar And Amy Duggar To Star In New Reality TV Show Like ‘The Kardashians’?