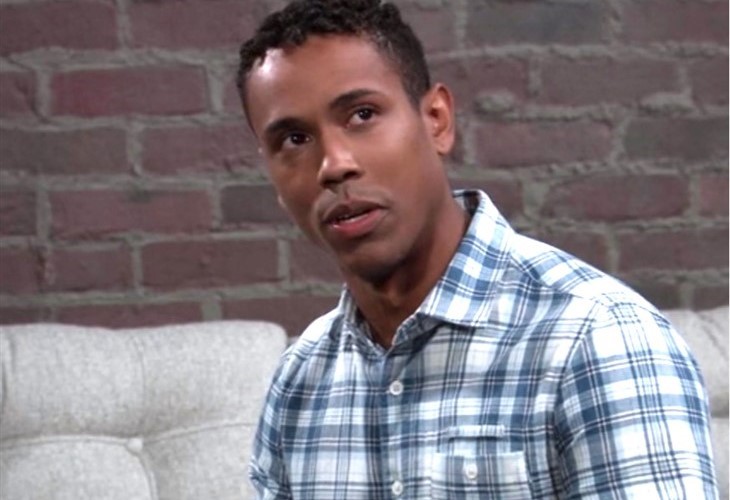 General Hospital (GH) spoilers for Monday, May 9 tease regrets and plots amongst the Port Charles power players in the next episode of GH!

TJ Ashford (Tajh Bellow) continues his conversation with Curtis Ashford (Donnell Turner) in a hallway at GH. He had just gotten done showing Curtis the clarinet, Marshall Ashford’s (Robert Gossett) prize possession that he’d gifted him with. TJ had asked Curtis what that meant, after he had read him the note that Marshall left with the clarinet.

Curtis told TJ that it meant he had driven his father out of town by all his questions which he wouldn’t let him answer in his own time. TJ tells Curtis what’s even worse, is losing the one chance that he had had with his father; Marshall had left no clues as to where he was headed!

GH Spoilers – I Need To Know

At Kelly’s, Spencer Cassadine (Nicholas Chavez) is behind the counter as Cameron Webber (William Lipton) buttonholes him! Previous General Hospital episodes had revealed that Spencer told him he was trying to get Trina Robinson (Tabyana Ali) exonerated, and that he was playing Esme Prince (Avery Kristen Pohl). The two boys had gotten into a fight over Spencer’s insistence in keeping his plan secret from Trina and Josslyn Jacks (Eden McCoy) and they’d spent time in jail! Josslyn has not been happy at all with Cameron over keeping secrets from her and Cameron wants to know something. He tells Spencer he needs to know that the hell he’s been catching from Josslyn is worth it!

General Hospital Spoilers – This Time It’ll Be On My Orders

Nina Reeves (Cynthia Watros) and Ava Cassadine (Maura West) are talking about the possible outcomes of the visitation hearing. Nina had been very upset with her attorney, Scott Baldwin (Kin Shriner) who she caught having a manicure in a nail salon, and told him to get on the stick! The opposing attorney, Diane Miller (Carolyn Hennesy) had stopped by and there was some out of court discussion, after which Scott and Nina agreed it was all out war!

Nina had told Scott that no holds should be barred on digging up dirt on Michael Corinthos (Chad Duell) and Willow Tait (Katelyn MacMullen)! She tells Ava when it comes to Nina’s rights to see her grandson, Wiley Corinthos (Viron Miller) this time it’ll be on her orders!

Valentin Cassadine (James Patrick Stuart) continues his conversation with Carly Corinthos (Laura Wright) over putting an end to the war between her and Nina. They continue talking about the court challenge and Valentin tells Carly, she means to tell him there’s no hurting there??…. Nina is hurting! Valentin is on Nina’s side even if Carly thinks he’s lost his mind by continuing to support her in her rights to visitation of her grandson through her late daughter! Valentin made a point to Carly that even though Nina had taken away Sonny, Carly had taken away Nina’s daughter in effect by not telling her what she’d known! Carly knew, albeit after her death, that Nelle Benson (Chloe Lanier) had been her daughter!

At Wyndemere Castle, Esme Prince lurks and listens for whatever she can find out to help her in her plot to separate Ava and Nikolas Cassadine (Marcus Coloma). Previous GH episodes revealed Spencer is jealous over the attraction between Trina and Officer Rory Cabrera (Michael Blake Cruse). Josslyn has noticed and so have Spencer and Cameron, but they’re not the only ones!

Esme has noticed the attraction between Trina and Rory too and she plans to use it against Trina, and also against Spencer! She’ll soon see Spence snooping around where he doesn’t belong and she won’t like it!