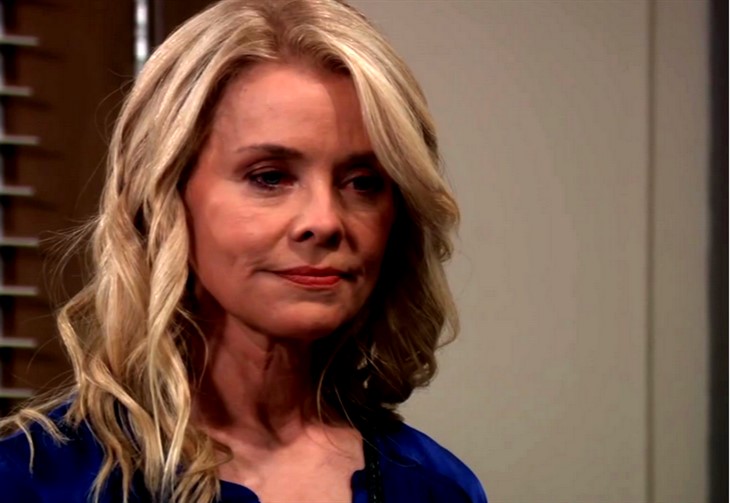 General Hospital (GH) spoilers and updates for Monday, May 2 tease more drama on GH with some having regrets, others needing to make preparations!

Contented grandma Felicia Scorpio (Kristina Wagner) holds baby Bailey Jones (London and Jett Prinzo-Berendt) as she remarks to Mac Scorpio (John J. York) where the time’s gone! She can’t believe it’s even possible how fast the baby girl has grown since she was found to have been hidden in plain sight the whole time she was missing. Previous GH episodes revealed that Brook Lynn Quartermaine (Amanda Setton) had protected her, pretending she was her baby with Valentin Cassadine (James Patrick Stuart), later amended to Harrison Chase (Josh Swickard)!

Bailey looks contented as well as she coos and Felicia plays with her, the danger from her birth father Peter August (Wes Ramsey) seeming a million years ago. It had been Felicia who delivered a fatal blow to his head and brought her daughter back from Austria where she had played a dangerous game!

Hamilton Finn (Michael Easton) talks to Elizabeth Baldwin, (Rebecca Herbst) who is still having problems with an apparent stalker acting like the ghost of Franco Baldwin (Roger Howarth)! Previous GH episodes revealed she had to move out of her home and into the Metro Court while police investigate following the attack on Harrison Chase! Finn would like to do nothing more than just make it all go away, but there is something he thinks he can do. Finn tries to cheer Elizabeth up and tells her he thinks he might be able to help with “that last part”.

General Hospital Spoilers – If You Don’t Want To Go Out, Just Say So

At Maxie Jones’ (Kirsten Storms) apartment, she and Austin Gatlin-Holt (Roger Howarth) seem to be having a serious conversation about their social life! Austin tells Maxie if she doesn’t want to go out with him tomorrow night, she should just say so! The two would-be sweethearts seem to be having a difficult time defining their relationship and what they each want out of it.

Maxie looks disgusted while Austin looks like he’s trying really hard to get on the same page with her. The two of them may be from two different worlds and the differences may be enough to split them up in spite of their efforts and desires!

Damian Spinelli (Bradford Anderson) and Sonny Corinthos (Maurice Benard) share an unexpectedly warm moment, perhaps reminiscing about Jason Morgan (Steve Burton). Sonny apparently has something that he wants Spinelli to look into and Spinelli is happy to oblige him. Sonny has Brick (Stephen A. Smith) but with some things, it takes the Jackal’s expertise. Spinelli agrees to the task and tells Sonny he’ll be the first to know as he smiles.

Liesl Obrecht (Kathleen Gati) spends some time with her daughter Britt Westbourne (Kelly Thiebaud) and niece Nina Reeves (Cynthia Watros) catching up at a restaurant. They are probably at The Metro Court, and Liesl’s not happy with something or someone, and it’s quite obvious as she says someone will feel her wrath! Later, both Britt and Nina will have some situations to attend to, although Nina’s looks quite less stressful.

No doubt the three of them are talking about various stressful situations in their lives and Obrecht threatens to fix them as only she can! Something has certainly made Liesl upset as they try to spend a nice evening out!

Nina spots Sonny at the Metro Court bar and asks him if he’s looking for someone – he turns around and smiles. Since her and Britt’s evening with Aunt Liesl apparently was interrupted, they may as well hang out with each other. It is a rare occasion that Sonny and Nina can spend some time together without someone being upset about it, but obviously they’re not aware of current events at GH! They would both be there if they knew what had happened to some of their loved ones!

At General Hospital, Carly Corinthos (Laura Wright) is in the chapel with Willow Tait, (Katelyn MacMullen) getting ready to tell her what happened at Rana Point. Willow had wanted answers from a distraught Sasha Gilmore Corbin (Sofia Mattsson) as to why her mother was out in the woods at night! Carly had asked for some time alone with Willow, and Sasha had obliged so Carly could give Willow some answers.

Harmony Miller (Inga Cadranel) had kidnapped Carly and was getting ready to kill both her and Alexis Davis (temporarily Stephanie Erb). Harmony got away while Alexis called 911, and ran out in the road when she was hit by Sasha, fleeing persistent paparazzi! Needless to say, Willow will be shocked!

GH Spoilers – Harmony Miller Takes A Turn For The Worse?

Britt must have gotten a call to come to work when she was out at dinner, as she is at GH when she runs to get Michael Corinthos (Chad Duell)! Apparently Harmony, who Sasha gave lifesaving CPR to at the site of the wreck, has taken a turn for the worse after being taken into emergency surgery! Britt tells an alarmed Michael that they need to find Willow right away! It doesn’t sound good for Harmony!

Days Of Our Lives Spoilers: Chanel Learns The Truth