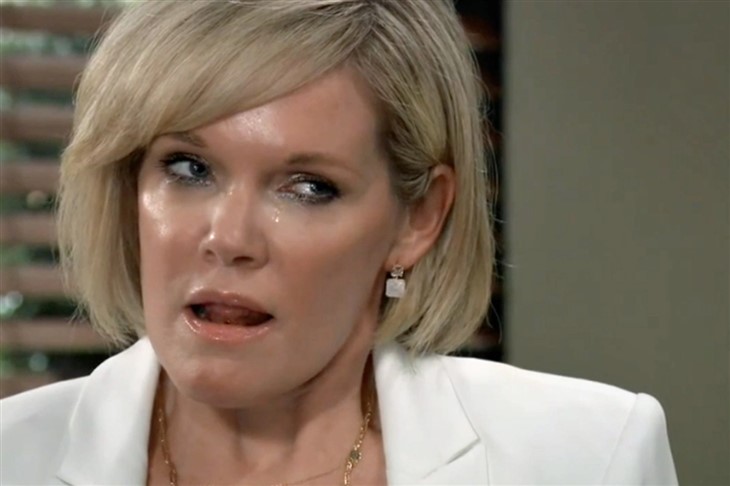 General Hospital (GH) spoilers and updates for Monday, August 22 tease truths will be told and warnings will be given. Some secrets will be exposed and some will be shocked as the Port Charles residents interact.

In the Quartermaine kitchen, Brook Lynn Quartermaine (Amanda Setton) is defensive as she tells Dante Falconeri (Dominic Zamprogna) that she would never use Harrison Chase (Josh Swickard). Previously, Dante had confronted BLQ about using Chase to run a con to expose her smarmy former manager Linc Brown (Dan Buran). It’s not that Chase and Brook Lynn aren’t trying to expose Linc for the crook he is and take him down, but she’s not using Chase.

Dante is understandably concerned for his former Port Charles Police Department partner, as he is still waiting on the civilian review board to make their decision. Chase has been on suspension and may not be able to return to the force if this operation he and Brook Lynn are collaborating on backfires.

At General Hospital, Port Charles Police Commissioner Jordan Ashford (Tanisha Harper) buttonholes her son, Dr. TJ Ashford (Tajh Bellow), and he appears to be evasive. Jordan asks TJ why she gets the sense that he’s trying to get rid of her, but if she’s trying to get medical information that might be why. If it’s something pertaining to the medical care or records of a patient, she should know that information is privileged just like criminal records. Chances are, she might be looking for some information about Esmé Prince (Avery Kristen Pohl) and wants a look into Oz Haggerty’s (Max Faugno) medical file. Even though Esmé is missing, if she can identify the drug Oz was drugged with as the same one Trina Robinson (Tabyana Ali) was, it’s a smoking gun.

Curtis Ashford (Donnell Turner) and Portia Robinson (Brook Kerr) appear to be at the Metro Court Pool and he’s got a surprise. It looks like he might be ready to propose marriage to her as he tells her that’s exactly where he would be for the rest of their lives. Portia smiles as he has his arm around her and looks like she’s all in for whatever romantic surprise he’s got for her.

It’s been a long, long time of tensions and uncertainties in their lives as Trina endured her false accusations and trial. Now that the charges have been dropped, the couple can finally breathe, and get on with their lives.

At Kelly’s, Ava Cassadine (Maura West) sounds like she’s ready to drop a bombshell on Spencer Cassadine (Nicholas Chavez). She tells him she has truth that will lay him to waste, and it’s probably the concocted story she, Nikolas Cassadine (Marcus Coloma) and Victor Cassadine (Charles Shaughnessy) agreed on. Viewers know she’s not going to tell Spencer that Esmé is presumed dead after she and Ava struggled on the parapet of Wyndemere Castle and Esmé fell off. She’s probably going to tell him that his horrible girlfriend, as Portia had called her, has left town for good.

Back at the Quartermaine mansion in the kitchen, Dex Heller (Evan Hofer) has a warning for Michael Corinthos (Chad Duell) as he obviously talks to him in code. Viewers will remember Dex is a plant into Sonny Corinthos’ (Maurice Benard) organization to take him down from the inside. Dex is worried that Sonny is suspicious of him after he confronted him with the lies about his military background that Brick (Stephen A. Smith) dug up.

Dex warns Michael that his plane could be going down in flames, referring to Michael’s plan of which Dex is a main part. The more suspicious Sonny becomes, the more digging he’ll do and he might expose their plot.

Outside, Sonny and Nina Reeves (Cynthia Watros) appear to be having a pleasant conversation, other than Nina asking if he’s mad at her or if it’s something else. Sonny appears relaxed but Nina has gotten to know him well enough to know if something’s bothering him and he’s hiding it. Sonny is no doubt pre-occupied with the Dex situation, but there are other things going on too that might be causing tension. The two lovers don’t have a lot of approval from family and friends, but since when has that ever stopped either Sonny or Nina?

Willow Tait (Katelyn MacMullen) has certainly got something to be upset about and to be worried about. She has just received a devastating diagnosis of leukemia in her first trimester of pregnancy. The chemotherapy could harm the baby but if she doesn’t go through the chemo, both she and the baby could die.

Willow talks to her OB/GYN Dr. Britt Westbourne (Kelly Thiebaud) who is no doubt giving her some narrow options of either she takes the chemo or not. There may not be much choice for Willow and she won’t want to risk her baby’s life and health; she is troubled as she says she won’t accept that.