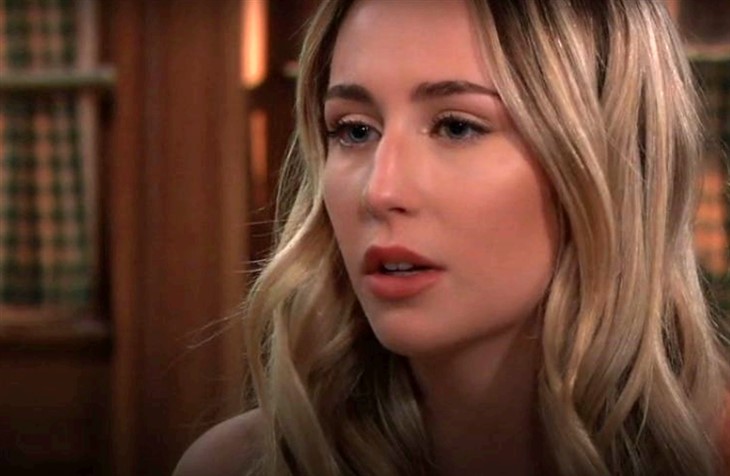 General Hospital (GH) spoilers tease that Josslyn Jacks (Eden McCoy)is about to have her entire life turn upside down. As viewers know, Esme Prince (Avery Kristen Pohl) recorded Joss making love to Cameron Webber (William Lipton) at Sonny Corinthos’ (Maurice Bernard) cabin. Esme and Spencer Cassadine (Nicholas Chavez) left before Cam and Joss got intimate, but Esme already had everything set up, leaving Trina Robinson (Sydney Mikayla) as the only other person present at the time.

Esme was quite thorough. She even drugged Trina’s drink so that Trina won’t be able to recall what happened at the cabin. Although she won’t want to believe that her friend could do something so awful, Joss can’t see how the guilty party could be anyone else but Trina. And since was drugged, she won’t be able to defend herself properly. Having the recording leak with be devastating to Joss, so look for her to lash out at her friend. This could potentially be the end of Trina and Joss’ long friendship if the truth doesn’t come out fast. Trina won’t be able to understand what’s happening and will be devastated.

For months now, both Trina and Joss have seen right through Esme’s nice girl act. They’ve made it a point to shut Esme down every time she tried to befriend them. Esme has plans of her own, and her relationship with Spencer is a big part of those plans, so this is Esme’s way of not only getting revenge, but keeping her plans for Spencer going forward.

Trina and Joss were right to be concerned about Esme. She has an obsession with serial killer Ryan Chamberlain (Jon Lindstrom) and even took an internship a t Spring Ridge prison to get closer to him. With Trina and Joss dealing with the fallout from the leaked sex recording, they will be in no position to get in the way of Esme’s plans. And as long as Joss blames Trina for it, Esme will be free to carry out those plans.

Will Esme’s plan work? Will Joss see through Esme’s scheme? Or will this be the end of Trina and Joss’ friendship? Anything can happen in Port Charles so stay tuned to General Hospital airing weekdays on ABC. And don’t forget to check back right here regularly for all your General Hospital news, information and spoilers!

90 Day Fiancé: Fans Saw Mike Taping With A Woman And It’s Not Ximena

Days Of Our Lives Spoilers: Chad And Abigail’s Reunion, Will Kristen Escape Again?