GH Spoilers: Is Rory One Of Esme’s Adoptive Brothers? 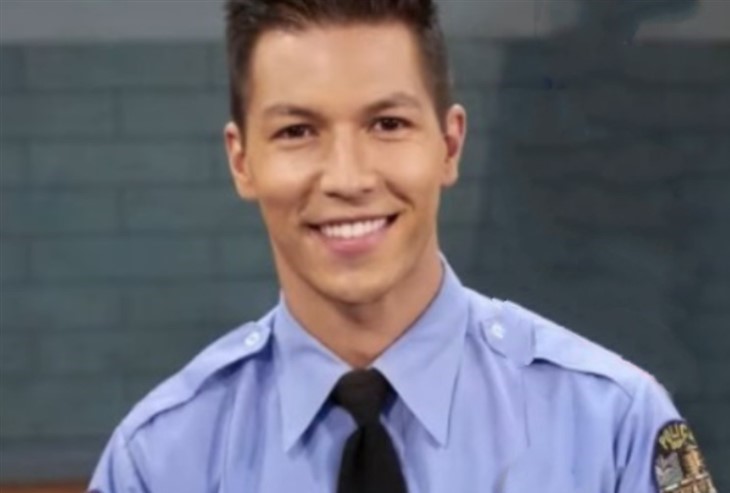 General Hospital (GH) spoilers and rumors tease that new PCPD rookie Rory Cabrera (Michael Blake Kruse) could be taking an unusual interest in Trina Robinson’s (Tabyana Ali) criminal case for other reasons than he’s attracted to Trina. General Hospital viewers know that he’s been in the background listening closely when Josslyn Jacks (Eden McCoy) and others have been at the PCPD saying that Esme Prince (Avery Kristen Pohl) is who they should be investigating!

General Hospital viewers will have noted that Rory’s ears seemed to perk up and that he took attention to hearing various friends and supporters of Trina’s mentioning Esme’s name, as if perhaps he’d heard it before. Even though Rory’s last name and Esme’s are different, they could have grown up in the same home – it’s possible that her adoptive parents adopted several children, and sometimes they foster children before adopting them.

That would explain the different last names if Esme and Rory were adoptive or pending adoptive brother and sister, and he very well may have remembered other horrible things that Esme did as they were growing up. Rory cannot take sides as a member of the Port Charles Police Department, but he clearly appears to be “Team Trina” as he brought her a soda in the interrogation room and smiled. He was also very friendly with her as she and Joss encountered him at Kelly’s in a recent episode of General Hospital, even though Josslyn smarted off at him!

General Hospital viewers may find that Rory may be doing some investigation on his own, as he often has to bring case files to the detectives as he did with the one he sent to Detective Dante Falconeri’s (Dominic Zamprogna) phone recently. This was the file that Sam McCall (Kelly Monaco) got into his phone to look for, after Carly Corinthos (Laura Wright) pestered her to try to see if the PCPD had any evidence against Esme!

If Rory is indeed familiar with Esme and her manipulative stunts and lies, he’ll want to do anything he can to help clear Trina. General Hospital viewers can tell that he and Trina are clearly attracted to each other, but that will give him even more of a motivation to clear her and haul in his adoptive or foster sibling! If he does know Esme that well, he’ll want to make sure that he has that smoking gun to be able to make any potential arrest stick because he knows what he’s dealing with!

General Hospital viewers know that General Hospital sometimes recycles old storylines with new characters –and many viewers are reminded of Nelle Benson (Chloe Lanier) when they think of Esme Prince. Even Josslyn referred to her as “Nelle 2.0” and that may have been a hint – General Hospital viewers will remember that when Detective Harrison Chase (Josh Swickard) came to Port Charles, he came looking for Nelle to bring her to justice.

Could it be Rory has come to Port Charles looking for Esme to bring her to justice, and knows of other crimes she’s committed in the past like Chase did looking for Nelle? It’s possible, but since Rory is a rookie he cannot formally do a lot of detective work although he can look for intel in the case files, the evidence room, and he can be observant and watch and listen! Chances are, the reason Esme didn’t get along with her adoptive family is because she made lots of trouble and maybe even killed her adoptive parents – and Rory wants to avenge them!