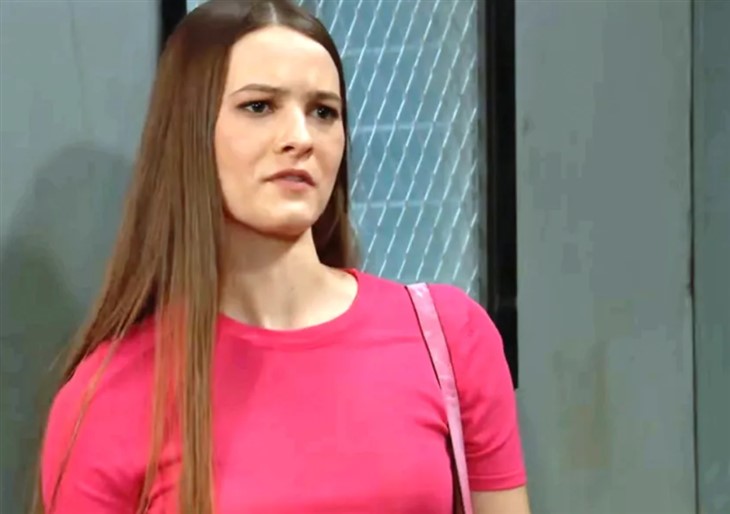 General Hospital spoilers reveal that Esme Prince (Avery Kristen Pohl) has taken a fall off the parapet. Esme haters are hoping they have seen the last of the conniving little snake. However, it doesn’t look like that is likely to be the case. What is the status of Pohl’s contract with the show?

General Hospital spoilers reveal that once Pohl joined the cast of GH last August, Esme quickly became one of the most popular characters in daytime television. At the time, Pohl signed a three-year contract so Esme is likely here to stay. After all, Esme has been up front and center for months. How long will it take Esme to surface after her fall?

Esme has too much potential for writers to get rid of her this quickly, doesn’t she? Esme’s crazy has just begun to be explored. How much like Ryan Chamberlain (Jon Lindstrom) is Esme? Who is Esme’s mother? Is Esme pregnant with Nikolas Cassadine’s (Marcus Coloma) baby?

Esme has already tortured Ava Jerome (Maura West) stalking her and trying to break up her marriage. Esme blew up Ava’s car and planted Kiki Jerome’s (ex- Hayley Erin) hospital badge for Ava to find. Esme even went so far as to sleep with Ava’s husband.

Esme has been doing Ryan’s bidding for months trying to ruin Ava and Nikolas’ marriage so that Ryan would have a free road to Ava. However, it seems that Nikolas isn’t going to allow this to happen so easily. Can Nikolas protect Ava from Ryan?

General Hospital Spoilers – What Will Happen To Esme Prince?

Esme has taken a fall off the same parapet that Valentin Cassadine (James Patrick Stuart) threw Ava off of. Of course, we know Ava survived. Unfortunately, G.H. has been known to change direction in its stories and cut contracts short as well. A few actors have had this happen to them in recent years.

Granted, Pohl may be gone for a short time while we wait for Esme to resurface. Pohl could have needed time off for another project adding to the suspense of her return. Esme could be dead causing Ryan to come after those responsible for hurting her as well. Until Esme’s fate is revealed, keep checking back for G.H. spoilers, news, and updates.

B&B Spoilers: The Steffy And Finn Family Reunion You’ve Been Waiting For