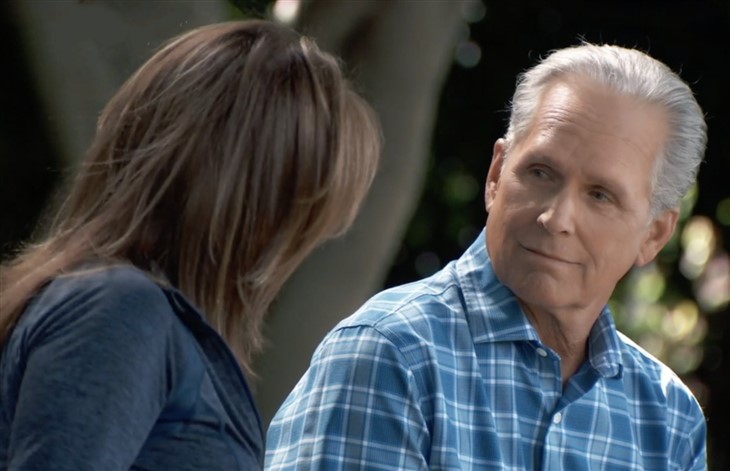 General Hospital (GH) spoilers reveal Alexis Davis may actually be getting a love interest and a storyline after being in limbo for what seems like forever.

We all know Alexis Davis (Nancy Lee Grahn) likes to fall for men who are bad for her, with Julian Jerome (William deVry) being the prime example, and Ric Lansing (Rick Hearst) coming in a very close second. Since Julian, Alexis had a drunken one-night stand with Ned Quartermaine (Wally Kurth( and even had one night with Hamilton Finn (Michael Easton) before falling for Neil Byrne (Joe Flanigan), and we all know how that turned out.

Alexis now knows it was Harmony Miller (Inga Cadranel) who killed Neil in her bed while they both slept, but Harmony isn’t around anymore for Alexis to blow off steam. Thanks to Sasha Gilmore Corbin’s (Sofia Mattsson) drug problem, she is dead.

But now it looks like she has a new man to spar with and it’s the father of one of the men she slept with, Gregory Chase (Gregory Harrison), Finn’s dear old dad.

Gregory Chase is now divorced from investigative reporter Jackie Templeton, but he is still an old-school journalism professor and hates what he sees in The Invader. It is too much like a tabloid and maybe even fake news to him, but that’s not what Alexis is trying to do. She is trying to do right by Shawn Butler (Sean Blakemore) since he left the paper in her hands to tell the truth on hard-hitting stories.

When Alexis and Gregory have another argument over the direction of The Invader like they did quite a few weeks back, they decide to leave things up to the paper’s readers.

“Gregory has strongly-held, black and shite ideas about how things should be,” Gregory Harrison said in the July 12, 2022, issue of Soap Opera Digest. “And Alexis, she’s the editor of the newspaper so she’s not coming from the theoretical world, she’s coming from the real world and the day-to-day challenges of making decisions about what should be printed and how it should be approached.”

So, they agree for Gregrory to write an op-ed, and if it gets good reader approval, he will have more say in what goes into The Invader. Stay tuned to General Hospital weekdays to see how this story plays out.